For the main character, see Will Scarlet. 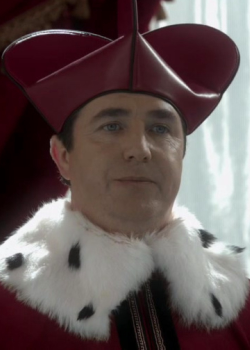 The Knave of Hearts is a minor character on Once Upon a Time. He is the right hand man of the notorious Queen of Hearts. He is who she talks through when hidden behind her red veil.

The Knave of Hearts arrests Jefferson and has him taken by some royal guards to the Queen of Hearts. Jefferson is taken before the Queen of Hearts by the guards, everyone around him is wearing masquerade masks and the queen herself has her faced covered by a red veil. She talks to the Knave of Hearts through a long pipe that comes from her mouth and into his ear, he listens to her mumblings. "Your majesty says she knows you're responsible for helping steal from her." the knave repeats to Jefferson. "The queen! She tricked me!" Jefferson protests, the Queen of Hearts stomps her foot, "That woman's name is Regina!" the knave exclaims, "There is only one queen: The Queen of Hearts." he corrects him. Jefferson apologizes and the queen is heard whispering something to the knave through her pipe, "Your majesty wishes to know how you got to this world. How did you come to Wonderland?" the knave asks. "If I tell you, will you let me go home to my daughter?" Jefferson asks, the knave and the queen laugh, the next thing the Queen of Hearts whispers is very audible, "Off with his head." Jefferson becomes very worried, a guard with a very large axe walks over to him, he swings the axe and cuts Jefferson's head off as another soldier grabs his hair, meaning that his head is held up whilst his body drops to the ground. As Jefferson's head is held up, his eyes are still open and his mouth is still moving, he is shocked to be alive. "I'm alive!" he exclaims, staring at his body on the ground. "If you wish your body back, then answer, how did you get here?" the Knave of Hearts asks. Jefferson says he used the hat, the knave, from the queen, asks where the hat is now. "She took it. Regina." Jefferson explains. "If all you require to make it to your homeland is this magic hat, then surely you can make another?" the knave asks. "I can't. A hat without magic is just a hat. It won't work." he says. The knave tells him that that's his task, to make another magic hat. ("Hat Trick")

In Wonderland, Captain Hook is being dragged by knights before the Queen of Hearts. A golden and red masquerade mask covers the Queen's face and the Knave of Hearts bows to her before standing at her side, Hook is made to kneel and the Queen of Hearts waves an arm as an order for the Knave to lift her horn, he does so and she whispers through it, into the Knave's ear. The Knave tells Hook that the Queen would like to know why he's come to Wonderland, Hook explains that he's in search of someone. "In a native land, she goes by 'Cora'.", Hook tells her, "In this land she goes by 'Your Majesty'!", exclaims the Queen of Hearts, standing up and removing her mask, revealing herself to be Cora. She orders her royal ensemble to leave her and Hook alone, each and every one of them immediately oblige, scattering from the premises. ("Queen of Hearts")

Retrieved from "https://onceuponatimeabc.fandom.com/wiki/Knave_of_Hearts?oldid=113186"
Community content is available under CC-BY-SA unless otherwise noted.