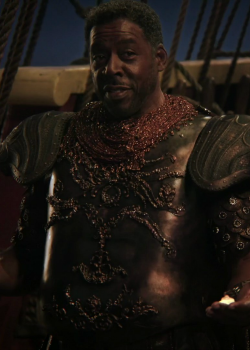 King Poseidon is an episodic character on Once Upon a Time.

Following the death of her mother, Ursula is commanded by her father, King Poseidon of the Sea, to use her singing voice to lure sailors to their doom. One day, Ursula nearly leads Captain Hook and the crew of the Jolly Roger to their demise, but stops before they hit a group of sharp rocks. Ursula later leaves the sea, not wishing to abide by her father's rules. She starts working at a tavern as a singer in hopes of earning enough money to travel to Glowerhaven, a place her mother always enjoyed singing. She runs into Hook, who realizes she's the mermaid who almost got him killed, but since she didn't, he feels the need to buy her a drink. Hook agrees to take Ursula to Glowerhaven for free, but when King Poseidon tries to buy him off with squid ink in exchange for detaining his daughter's singing voice in a shell, the pirate alerts Ursula, who agrees to steal the squid ink for him instead so they may both get what they want. Before the two are able to set sail, however, Poseidon arrives and uses magic to get rid of the squid ink as punishment. Angered that his only hope of revenge against Rumplestiltskin has been crushed, Hook traps Ursula's singing voice in the shell so the Sea King can never use his daughter to sink another ship again. Poseidon tries to make up with his daughter later on, however, but Ursula is unforgiving, and instead she steals her father's trident to transform her mermaid tail into tentacles and takes control over the sea, deeming herself to be feared. ("Poor Unfortunate Soul")

Years have passed, and Ursula has formed a group with two other sorceresses, the Queens of Darkness, and they've teamed up with Rumplestiltskin and gone on a quest to find a magician known as the Author in hopes of finally gaining their happy endings. Their journey leads them to Storybrooke, Maine, where the Queens of Darkness and Rumple become a threat to those in the small town. Hook, who is now one of the heroes, decides to use his past with the Sea Witch to his advantage and promises Ursula her happy ending if told the Dark One's plan. The pirate originally fails, but with the help of a mermaid named Ariel, who travels through a portal to retrieve Poseidon, Ursula is reunited with her father and also regains her singing voice. She and Poseidon then leave to go home, but not before Ursula reveals Rumple's plan: to darken Emma's heart. ("Poor Unfortunate Soul")

1 of 1
Add photo
Retrieved from "https://onceuponatimeabc.fandom.com/wiki/King_Poseidon?oldid=89997"
Community content is available under CC-BY-SA unless otherwise noted.