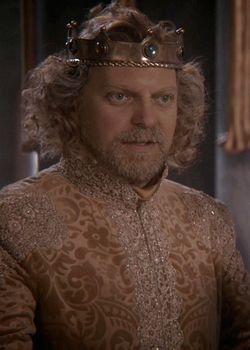 King Midas is a minor character on Once Upon a Time. He was a classy and generous king, albeit slightly greedy, who was cursed with the ability to turn everything he touched into solid, valuable gold. Father to the beautiful Princess Abigail, it was Midas' plan that his daughter married King George's son, Prince James, after Midas had accidentally turned Abigail's beau into a golden statue.

Midas is a king who can turn anything he touches into gold. His daughter, Princess Abigail, was in love with Frederick, who, after protecting Midas and Abigail, was accidentally turned to gold by Midas at a single touch. Frederick was honored through statue (which was still him) which was placed in a gazebo in the forest, Abigail continued to love him despite this, and wanted a way to bring him back. ("What Happened to Frederick")

King Midas' kingdom was plagued by a dragon that killed any man who tried to slay it, after seeing Prince James in action, Midas told King George that his son shall slay the dragon, and, if he does, he will offer him riches, as a token of his seriousness, he turns James' sword to gold. However, after Midas leaves, James is stabbed by the soldier he "killed". James is replaced by his brother, Prince Charming, who to everyone's surprise, managed to slay the dragon with James' golden sword. After this victory, Midas offered the riches to the other kingdom, as well as a secret offer. He explains that he wanted to see who could slay the dragon as a test to see who was worthy of his most treasured possession: his daughter. Charming is now forced into an arranged marriage to Abigail, despite him believing in only marrying for love. King George tells him that if he doesn't do it, his mother will die. ("The Shepherd")

Prince Charming abandons his wedding to Princess Abigail who soon finds him, she explains that she does not want to marry him either because she is in love with someone else: Frederick. Charming is taken to, and told the story of, Frederick. However, Charming revives him with special water from a magical lake, meaning that Midas' daughter can be with her true love and he now has a way to reverse the effects of his gold-magic. It is presumed that Midas' funds to the kingdom were cut off after his daughter didn't marry their prince. ("What Happened to Frederick") Prince Charming is about to be beheaded by King George for abandoning his marriage when Regina storms in and stops it, offering to pay as much as Midas did for custody of Charming. ("An Apple Red as Blood")

Emma Swan and Captain Hook fall through a time travel portal created by the Wicked Witch of the West and end up in the Enchanted Forest of the past, where they accidentally interrupt the meeting of Snow White and Prince Charming, making it so the former never robbed the latter's carriage and stole the wedding ring intended for Princess Abigail. Instead, Abigail and "James" arrive at King Midas' golden castle as planned, and it is here that a ball is held in the engaged couple's honor. King Midas greets Emma and Hook, who are under a glamor spell, and they introduce themselves as the aliases they make up on the spot: Prince Charles and Princess Leia. He welcomes them happily into his home, and he later greets Queen Regina with high esteem when she enters the ballroom. However, he becomes enraged when he hears that the bandit Snow White has been sighted upstairs, and demands that she be found by his knights. Snow White escapes, however, and Emma is arrested by the Evil Queen for aiding her. ("Snow Drifts") However, time is put back in place and Emma and Hook return to the future. ("There's No Place Like Home")

Retrieved from "https://onceuponatimeabc.fandom.com/wiki/King_Midas?oldid=113157"
Community content is available under CC-BY-SA unless otherwise noted.