For the episode, see The Jolly Roger. 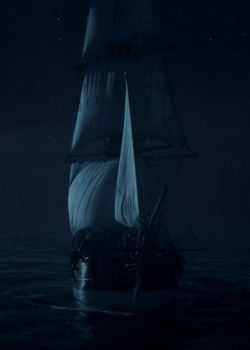 The Jolly Roger, formerly known as the Jewel of the Realm, is the ship on which Captain Hook and his pirate crew took refuge for many years. It is carved from enchanted wood, and is therefore the fastest ship in all the realms.

Killian Jones and his crew sail the Jolly Roger into the docks of a small village in the Enchanted Forest while they stop off for a drink in a local tavern. When there, Killian meets Milah, and takes her with him on the Jolly Roger. Rumple visits the Jolly Roger to get his wife back, but ends up leaving empty handed. Many years later, the crew return to the village on their ship again, and Milah, now a member of the crew, ends up being murdered by Rumplestiltskin, who is now the Dark One. Killian also loses his left hand, and puts a hook in its place, giving him the title Captain Hook. The crew then sail the Jolly Roger into a portal, that takes them to Neverland. ("The Crocodile") An unknown amount of time later, as Hook sails with his crew around the island of Neverland, they come across a young boy in the night waters so they fish him out of the water, rescuing him. ("Second Star to the Right") Over the course of an unknown amount of time, the young boy that Hook rescued, Baelfire, becomes an honorary member of the crew, and Hook even protects him when the Lost Boys ambush the ship the find him. Hook bonds with Bae by teaching him how to sail the ship, however, after an argument, Hook turns the boy over to the Lost Boys, who visit the ship to collect him. ("And Straight on 'Til Morning")

After returning from Neverland, Hook finds himself in the Enchanted Forest, trying to find a way to Storybrooke with Cora so he can get revenge on Rumplestiltskin. They use a magic bean to create a portal at Lake Nostos, and they both sail the Jolly Roger through it to the small town in Maine. ("Queen of Hearts") When they arrive at the docks, Cora cloaks the Jolly Roger with a spell so nobody can see it. Later on, the two villains use the ship as a place to hide their captive, Jiminy Cricket. ("The Cricket Game") Belle uses her intellectual abilities to track down the Jolly Roger, and she eventually discovers it when she notices seagulls perched on something invisible. She searches the Jolly Roger for a shawl that Hook stole, but ends up finding Jiminy, so she releases him. Hook takes Belle captive but Rumple eventually arrives and attacks the pirate, telling him to sail away from Storybrooke, however, he chooses to stay and shoots Belle in revenge. ("The Outsider") It is revealed that Anton the giant has been kept as a prisoner on the Jolly Roger, brought to Storybrooke by Cora, who intended to cause havoc. ("Tiny") A while later, when Rumple, Emma, and Henry go to New York to find Baelfire, Hook follows them on the Jolly Roger and eventually stabs Rumple. Rumple, Emma, Henry and Bae decide to sail the Jolly Roger back to Storybrooke to return quicker to save Rumple. ("The Queen is Dead") On the way, Bae teaches Henry how to sail, having been taught by Hook previously. ("The Miller's Daughter") When Storybrooke becomes endangered by Greg and Tamara, Hook intends to sail away on the Jolly Roger, leaving everyone behind to die, however, he has a change of heart and returns, only to discover Henry has been taken to Neverland. He, Rumple, Emma, Snow, Charming and Regina then all team together and sail the Jolly Roger to Neverland via a magic portal. ("And Straight on 'Til Morning")

Upon arrival in Neverland, Hook sails the Jolly Roger slowly to the island in order to not be seen. However, on their way, a group of mermaids attack the ship. When one of them is killed, a storm arrives and large waves hit the ship, severely damaging it. They soon reach the island and Regina offers to fix it with her magic, but she is told to save her energy for upcoming battles. ("The Heart of the Truest Believer") After a week of trying to find Henry - Captain Hook, Regina, Emma, Rumplestiltskin, Snow and Charming successfully find him and rescue him from Peter Pan. However, they head back to the Jolly Roger with more people than they arrived with. During the journey, they promised to take home Tinker Bell, Wendy and the Lost Boys so they can all finally have a home. They use the Shadow, an inhabitant of Neverland, to turn the main sail into a magical sail that gives the ship the ability to fly. Hook then flies everyone back to Storybrooke. ("Save Henry")

Retrieved from "https://onceuponatimeabc.fandom.com/wiki/Jolly_Roger?oldid=112449"
Community content is available under CC-BY-SA unless otherwise noted.