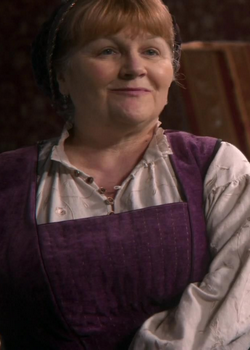 Johanna was a governess working for the benevolent Queen Eva, who served as a maternal figure of sorts to her daughter, Snow White, after the Queen passed away from a mysterious affliction. Johanna was transported into Storybrooke, Maine by the Dark Curse, and after the curse was lifted she reunited with her darling princess, but tragic circumstances led their reunion to be short-lived.

Shortly before Snow White's birthday, Johanna, a maid, finds herself alone in a room with the young princesses tiara. She puts the tiara on her head to feel special, but is caught by Snow and her mother, Eva. Snow is furious that a maid would dare disrespect her in such a way and demands she be punished, despite Johanna's apologies. However, Eva silences her daughter and explains that Johanna apologized, adding that everyone is equal, royalty or not. When Eva falls gravely ill, and all hope seems lost, Johanna is informed by the doctor to alert the king of his wife's condition. Shortly after, Johanna tells Snow of a family secret; something that may save the queen's life. She tells Snow that the Blue Fairy may be able to help heal her mother. Snow meets the Blue Fairy but is shocked to learn she must take the life of another. Refusing so, the queen dies as a result and Johanna comforts the young princess. She attends the late queen's funeral and collects Snow at the end of it, who stayed alone in silence after everyone else left. A while later, when King Leopold begins his search for a new wife, Johanna accompanies him and Snow across the kingdom and is present when Snow's horse loses control and runs off, leading her to Regina. ("The Queen Is Dead")

In Storybrooke, after the curse is broken, Johanna sends Snow White her tiara, which she happened across in Mr. Gold's shop. This leads Snow to come and locate her old friend, and they have a happy reunion. Snow notices the flower bed that Johanna was attending to, and states she hasn't seen those flowers in a long time. Johanna explains that they reminded her of Snow as she was born in the harshest winter. Snow notes that it's why she's called Snow. Johanna adds that the flower bed was a nice way to honor the late queen. However, the reunion is broke up when they hear a noise coming from the woods and Snow goes to investigate; revealing it to be Cora and Regina. Later, when Snow and Charming retrieve Rumplestiltskin's dagger, they're approached by Cora and Regina, who also want it. They reveal that they have Johanna captive, and say they'll kill her if they don't get the dagger. Snow eventually gives in and hands over the dagger, to save Johanna's life. The evil witches take the dagger, and as Johanna walks towards Snow in relief, Cora throws the poor maid off the top of the clock tower to her death, much to everyone's surprise, even Regina's. Snow and Charming later bury Johanna's body, and the recent events cause Snow to say that she's going to kill Cora. ("The Queen Is Dead")

1 of 8
Add photo
Retrieved from "https://onceuponatimeabc.fandom.com/wiki/Johanna?oldid=108777"
Community content is available under CC-BY-SA unless otherwise noted.