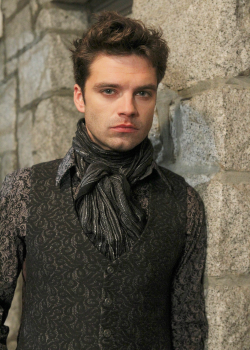 Jefferson is a supporting character in Once Upon a Time. Originally, he was a poor fungus merchant and single father to Grace. When he became trapped on the other side of the looking glass, he kept trying to make another magic hat to take him back, he made thousands upon thousands but none worked, thus he became the Mad Hatter. In Storybrooke, after the curse, Jefferson still remembers who he is and spends his time watching his daughter, Grace, now Paige, through a telescope, happy with another family.

Jefferson goes to Rumplestiltskin to give him something in exchange for some gold thread. Whilst their, Jefferson overhears Rumple say to Regina that people can't come back from the dead and that not even magic can stop that. Jefferson offers to take the queen to see Viktor Frankenstein of another world, he believes that he can bring Daniel, Regina's true love, back from the dead. They learn that this requires a magic heart, one that is ripped from one's body, and so Regina takes Viktor and Jefferson down to her mother's vault and gives Frankenstein one of the magic hearts. Frankenstein performs the procedure but tells Regina and Jefferson that it failed. It is soon discovered that the failure was orchestrated by Rumplestiltskin so that Regina may better herself as a student, and Viktor and Jefferson were both in on it. Jefferson sends Viktor back to his own world via the hat. ("The Doctor") Jefferson portal jumps to Camelot where he meets and falls in love with a fellow thief by the name of Priscilla, and after making memories of thieving from numerous realms with one another, they finally settle down in the Enchanted Forest and have a child, Grace. However, Jefferson takes one last offer and travels to Wonderland to rob the March Hare of a certain watch, but when Priscilla follows, she ends up murdered. Jefferson then returns home to raise Grace where he retires his hat, blaming portal jumping and himself for his wife's death. ("Out of the Past")

Jefferson is playing in the forest with his daughter Grace before telling her that it's time to start picking mushrooms to sell at the marketplace; when they arrive home, Queen Regina is waiting, wanting to borrow Jefferson's hat for a trip she needs him to take her on to another land. He initially refuses, having left all that behind him when he decided to raise his daughter alone, but when the Queen disguises herself as a hag and refuses to sell Grace the white rabbit toy she wants at the marketplace, Jefferson realizes that he wants her to have a better life than he can provide, and so he tells her to stay with the neighbors while he takes his hat out of retirement and leaves for Wonderland with Regina (under the condition that his daughter will want for nothing). He makes clear that if two go through the hat then only two can go back, and they fight their way through the Queen of Hearts' guards and hedges to make it to the vault wherein she keeps a series of chests. Regina grabs the one she wants and she and Jefferson head back to the Looking Glass, ready to go back into the Hall of Doors and home to the Enchanted Forest through the hat. However, before they do so, Regina grabs a piece of magic mushroom and feeds it to whatever's inside the box she stole - it's her father, Prince Henry, and the mushroom allows him to grow to his full size after having been shrunken by Wonderland's tyrant. Jefferson realizes that Regina had planned to betray him the whole time. She then returns home with her father, and she does exactly that, accompanying Henry through the hat while abandoning Jefferson in Wonderland. The Knave of Hearts then takes him to the Queen of Hearts, really Regina's estranged mother, who orders his execution. His head is cut off, but he remains alive, tasked with creating another hat capable of world-crossing. Needing a way to get back to Grace, Jefferson spends many years in Wonderland trying to make a hat that works. He never succeeds and is soon driven insane, embracing the moniker of the Mad Hatter. ("Hat Trick")

When Mary Margaret escapes jail, the sheriff Emma Swan goes out into the woods looking for her; while driving, she accidentally knocks Jefferson off the road, injuring his leg and offering to drive him home - where he says he has some maps of the town which could help her find her "lost dog" (something she says to avoid her friend getting in trouble). He offers her a cup of tea and she soon realizes that he's faking his limp, but it's too late to react because he's already drugged her, causing her to pass out. When she wakes up, she manages to escape her binds and begins to make her way through the mansion, eventually stumbling across Mary Margaret tied up and gagged in another room, having been kidnapped by Jefferson after she escapes. Jefferson soon finds the two ladies and threatens them with a gun, taking Emma aside and trying to force her to make him a hat. He explains that the Queen's curse, which she thought her son made up, is real, and he was sent to this land with all his memories intact to serve as special punishment because it means that he can't be with his daughter Grace - or, Paige, as she's as known in Storybrooke - but still knows how much he wants to be with her. He's been watching both her and Emma for a while through his telescope, believing the latter to be the all-powerful savior and thinking that if she makes a hat then it will be able to open a portal back to the Enchanted Forest, where he can retire with his daughter. She makes the hat, realizing along the way that he thinks he's the Mad Hatter, but it doesn't work and in a moment of distraction she takes his telescope and manages to whack him round the head with it. Rushing to free Mary Margaret, Emma is chased by a gun-toting Jefferson, who prepares to shoot her. However, Mary Margaret kicks him out of the window, and he vanishes - leaving nothing in his wake but the hat Emma made. ("Hat Trick")

Regina not-so-subtly puts a card with a picture of a white rabbit on it on the back of Paige's bicycle, as she knows Jefferson watches her. Jefferson soon bitterly turns up at Regina's house and wants to know what she wants, she explains that she needs the services of his hat to go through to the Fairytale Land to do something, and then return. Jefferson initially refuses but Regina tempts him with the notion of reuniting with his daughter, he tells her that he does not want this as what he really needs is new memories, ones without Grace, so that he can finally be free from his curse. Regina agrees and she takes Jefferson, and his hat, which she had all along, to a chamber below her father's grave, she tells him its the only place left that contains any magic. Regina throws a few supposedly magical objects into the hat and Jefferson tries to spin it, however, it doesn't work, he tells her that it needs more magic and Regina takes out the final souvenir she has left of her relationship with Daniel - her ring. Jefferson tells her that that'll work and throws it into the hat, it begins to spin but the magic is only enough to retrieve something, reach through but not go through. Regina retrieves her dreadful poisoned apple. ("An Apple Red as Blood")

Jefferson goes to Regina to collect on his deal and receive new memories, ones that do not contain Grace so that he can finally stop being mad. However, he visits her at the hospital at an inopportune time, when Henry's sick and dying, she refuses his offer, saying that the apple didn't go to the right person and therefore his side of the deal was not met, she does not pay up. Fed up with all Regina's unfulfilled agreements separating him from his daughter, Jefferson then dresses up as a doctor and goes to the underground psychiatric ward of the hospital. Drugging the nurse, he sneaks through the halls until he reaches one particular cell, the one containing the cursed counterpart of Belle, Rumplestiltskin's maid and love interest. Jefferson sets the girl free, which she is very grateful, and he asks her to go seek protection from Mr. Gold and tell him that Regina locked her up (knowing the Dark One will also seek revenge on Regina and carry both of theirs out), which she obliges. ("A Land Without Magic")

With the curse broken, Gold goes to exact revenge on Regina, just as Jefferson planned. Angry that Regina locked Belle up until the right moment to kill her, the Dark One marks her so a wraith will suck her soul. When her three enemies grudgingly help her on Henry's wishes, she retrieves the hat to send the wraith to another dimension, which Emma notes that it's Jefferson's, though Regina refuses to acknowledge its true worth. ("Broken") David is working himself crazy trying to figure out the origin of the hat that sent Emma and Mary Margaret away, he goes to Regina, asking her what she knows, however, she refuses to tell him, feigning she's forgotten. Charming talks to Henry who recognizes it from his book as the Mad Hatter's hat, Charming talks to Mr. Gold who gives him a potion that when poured on an object, will take you to its owner. Charming does this and the broken hat begins to fly, he follows it to a car wreckage where someone inside is calling out, Charming opens the car door and Jefferson crawls out, the owner of the hat. After this, Jefferson and Charming sit down and discuss the hat. Charming points out the tea set and toy rabbit that were in the back of the car, therefore knowing that Jefferson has a daughter he loves. Jefferson assures Charming that Emma and Snow are in fairytale world but he has no idea how to get them back, he says his out of luck. Soon, Jefferson runs away, madly, and Charming chases him, wanting to know where his wife and daughter are and how to find them, however, he is stopped by Red who needs him. ("We Are Both")

Charming tells Henry that he found Jefferson but that he doesn't think he can help, Henry refuses this information and decides to find Jefferson on his own. Later, Jefferson is looking at a poster drawn by Grace who is looking for him, he is soon found by Henry who notices this, and asks the Mad Hatter why he doesn't just go to Grace. Jefferson says that he was going to but he's sure that she'll hate him as he left her, Henry assures him that she'll be happy just to know why as not knowing is the worst part. Later, Jefferson watches some children get off a school bus, searching for Grace, and he finds her. The girl is happy to see her father again and the two embrace joyously. ("Lady of the Lake")

1 of 8
Add photo
Retrieved from "https://onceuponatimeabc.fandom.com/wiki/Jefferson?oldid=112978"
Community content is available under CC-BY-SA unless otherwise noted.