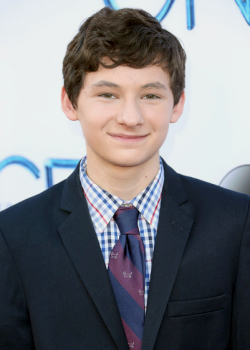 Jared S. Gilmore is one of the main actors of Once Upon a Time, portraying the role of Henry Mills.

Gilmore has his twin sister, Taylor, to thank for his introduction to acting. Taylor enjoyed modeling and acting and put on shows for the family. Their parents decided to find an agent for Taylor and brought Jared along for the ride. When they met the agents, it turned out they were interested not only in Taylor but Jared as well. Many auditions soon followed.

As fate would have it, Taylor came to the realization that she liked riding horses more than acting and decided to quit the business. But Jared continued his quest, landing his first job modeling t-shirts and doing commercials. This led to roles in both television and film. He recurred in the series Mad Men as Don Draper's son, Bobby, as well as in Hawthorne and Talkshow with Spike Feresten, and guest-starred on Men of a Certain Age, Roommates, Without a Trace and Passions. On the big screen, he starred in A Nanny for Christmas, The Back-up Plan, with Jennifer Lopez, Opposite Day and Overnight.

He currently stars as Emma Swan's biological son Henry Mills in ABC's Once Upon a Time.

In May 2017, it was announced that Gilmore would not be returning as a series regular for the seventh season of Once Upon a Time.

In his spare time, Gilmore likes playing Xbox and computer games with his friends. He has two dogs, Cooper and Emma, a cat named Tiger and a rabbit named Benjalina.

1 of 76
Add photo
Retrieved from "https://onceuponatimeabc.fandom.com/wiki/Jared_S._Gilmore?oldid=108648"
Community content is available under CC-BY-SA unless otherwise noted.