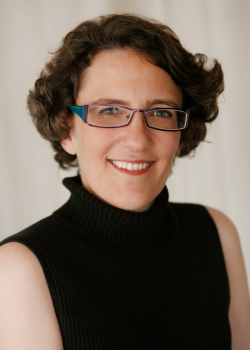 Espenson grew up in Ames, Iowa. As a teenager, Espenson found out that M*A*S*H accepted spec scripts without promise of payment or future work. Though she wasn't an established writer at the time, she planned to write her first episode. She recalls, "It was a disaster. I never sent it. I didn't know the correct format. I didn't know the address of where to send it, and then I thought, they can't really hire me until I finish junior high anyway." While Espenson was studying computer science and linguistics as a graduate student at University of California, Berkeley, she submitted several spec scripts for Star Trek: The Next Generation as part of a script submission program open to amateur writers; Espenson has referred to the program as the "last open door of show business."

Her next break was in 1992 with a spot in the Disney Writing Fellowship, which led to work on a number of sitcoms, including ABC's comedy Dinosaurs and Touchstone Television's short-lived Monty. In 1997 she joined the staff of Ellen as a writer and producer. After a year, Espenson decided to switch from comedic to dramatic writing and applied for a position at Buffy the Vampire Slayer.

In 1998, Espenson joined Mutant Enemy Productions as executive story editor for the third season of Buffy the Vampire Slayer. Espenson wrote or co-wrote twenty-three episodes, starting with "Band Candy" and ending with Buffy's penultimate episode, "End of Days". After her role as an Executive Story Editor, she was promoted to a Co-Producer in season four. In the fifth season she was promoted again to a producer. She took up the role of supervising producer in the sixth season and was promoted once more to a co-executive producer in the final season. She wrote episodes both humorous (e.g. "Triangle" and "Intervention") and serious (such as "After Life"). Espenson and Drew Goddard co-wrote the seventh-season episode "Conversations with Dead People", for which they won the Hugo Award for Best Short Dramatic Presentation in 2003.

Espenson joined the crew of Sci Fi's Battlestar Galactica (BSG) just after Battlestar Galactica: Razor, BSG's first television movie, was conceived. As one of BSG's co-executive producers, she has worked on every fourth season episode starting with "He That Believeth in Me"; she was also the writer of "Escape Velocity" and "The Hub" and co-wrote The Face of the Enemy webisodes. Prior to joining the show's staff she wrote one third season episode and co-wrote another. In August 2008, the Los Angeles Times broke the news that Espenson is the writer behind BSG's second television movie, The Plan, news confirmed in her writer's blog. In January 2009 it was announced that she had joined the spin-off series Caprica as co-executive producer and would take on showrunner duties midway through the first season. Espenson later gave up showrunning duties to focus more on writing.

In August 2010 it was announced that Torchwood creator, lead writer and executive producer Russell T. Davies had hired Espenson to write for the show's fourth series, "Torchwood: Miracle Day", to be broadcast in 2011. She later confirmed that she would be writing episodes 3, 5, 7 and co-writing episode 8 (with Ryan Scott) and episode 10 (with Davies). Prior to her involvement with Torchwood, Espenson had claimed to be a fan of the series, particularly the third series, "Children of Earth". To tie in with the launch of Torchwood: Miracle Day, Espenson and Scott collaborated on the Starz produced 2011 Torchwood webseries entitled Torchwood: Web of Lies, which stars American actress Eliza Dushku. Following the broadcast of each episode of "Miracle Day" on Starz, Espenson wrote a blog on AfterElton mixing her reaction to the episode with behind the scenes information on the devising process.

In January 2011, Entertainment Weekly announced that Espenson and fellow Buffy writer Drew Z. Greenberg would be writing a pilot for Syfy's version of Randall and Hopkirk (Deceased). She told io9 that "The version we're proposing is quite different in tone and content from the original." She added "We took the basic premise of a Ghost Detective and his still-living partner and invented our own take on it." In 2011 she also co-wrote and produced her first independent web series, entitled Husbands, which revolves around the life of two newly married gay men. The series premiered Tuesday September 13, 2011.

In May 2011, Espenson was brought on to the ABC fantasy series Once Upon a Time, as a writer and consulting producer.

Retrieved from "https://onceuponatimeabc.fandom.com/wiki/Jane_Espenson?oldid=113607"
Community content is available under CC-BY-SA unless otherwise noted.