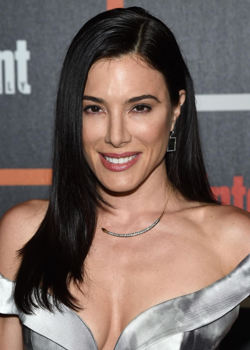 Jaime Murray is a supporting actor on Once Upon a Time, portraying the role of Fiona.

Murray was born in 1976 in London, England. Murray briefly studied philosophy and psychology at the London School of Economics, but dropped out to train at the Drama Centre London, where she graduated in 2000.

Murray's first taste of stardom was miming the lyrics in the original video of Stretch & Vern's dance track "I'm Alive"(1996). Some of her early television appearances included minor guest roles in BBC One's Casualty, The Bill, Love Soup, and ShakespeaRe-Told: The Taming of the Shrew.

Murray starred as Stacie Monroe in series 1 through series 4 of Hustle. In one episode, Murray so impressed her co-star Robert Vaughn with her modeling of a Wonder Woman costume that, according to several online sources, he showed it to studio executives in Hollywood. On the strength of this, Murray was invited to audition for the title part of the Wonder Woman (2009) movie. Later, Murray reprised her role as Stacie Monroe in Hustle, series 8.

Murray's other television credits include Dexter, Valentine, The Beautiful Life: TBL, The Finder, Spartacus: Gods of the Arena, and Defiance.

In 2016, Murray was cast as the Black Fairy on the sixth season of ABC's Once Upon a Time.

Retrieved from "https://onceuponatimeabc.fandom.com/wiki/Jaime_Murray?oldid=108526"
Community content is available under CC-BY-SA unless otherwise noted.