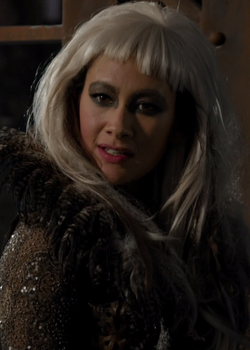 The Jabberwocky is a supporting character on Once Upon a Time in Wonderland. A dark and sadistic creature that feeds on the fear others produce, the Jabberwocky was imprisoned a millennium ago by hundreds of men with the Vorpal Blade, the only weapon capable of doing her any harm. However, a long time later, she was freed by the villainous magician Jafar, who sought her assistance in his scheme to cast a powerful spell with the power of three genies that would change the laws of magic forevermore. From then on, she became his reluctant servant, adhering to his desires lest he use the Vorpal Blade against her. Ultimately, Jafar cast his spell and left Jabber pinned to the wall of the Red Queen's dungeon.

At the village, all of the villagers are drinking off their hangovers from the beer that Will wished for them. The Jabberwocky walks through them and, finally, she finds Lizard's home and corpse. She then takes out a knife and advances on the corpse. Later, the Jabberwocky returns to Jafar's palace and gives him Lizard's eyes. He casts a spell and reveals the Red Queen's face, and realizes that she has the genie. Jafar then tells the Jabberwocky to bring him the Queen. Later, once the Queen and the Knave leave the Rabbit, everything goes silent and the Queen orders Will back into the bottle. She then hides it in the brush and demands that the Jabberwocky show her face. Anastasia decides to fight the creature, creating a sword by magic, and finally impales the beast to a tree. Laughing, the Jabberwocky pulls herself free and says that only one blade can do her harm. She then knocks out the Queen and recovers the bottle. The Jabberwocky takes the Queen and the Knave to Jafar and he locks them up. Jafar tells the creature to break the Queen so she will make her wishes. The Jabberwocky tells the Queen that she can dig into her mind and see what she's been hiding. She insists that she wants to help the Queen because she's lived a life of fear, and knows how she fears that love is out of reach. As the Queen starts to cry, the Jabberwocky continues to torment her with her knowledge of how she fears never getting back the Knave's love. Then, she tells her to wish for her crown and her jewels. The Queen obeys. Then, the creature asks her to wish for her to stop. When Anastasia makes the third wish, the Knave is pulled back into the lamp and Jafar takes it. Later, in the palace, the Jabberwocky reminds Jafar that he called to her for assistance, Jafar reminds her that he can easily kill her. ("Dirty Little Secrets")

After casting the spell that breaks the laws of magic and makes Jafar and Amara the two most powerful sorcerers in the world, Jafar, bringing with him the Vorpal Blade, goes to see the Jabberwocky, where she waits in the Red Queen's dungeon. He asks his slave to tell him what he is afraid of. The Jabberwocky senses he is now afraid of nothing. Jafar is satisfied with her response, commenting that that is what ultimate power is. He then starts advancing on her, leading her against the wall where he plunges the Vorpal Blade into her, trapping her forever. The Jabberwocky lets out a scream. Jafar starts to exit the dungeon, but the Jabberwocky asks him what he will do with his newfound power. He stops and turns back, answering that he can do anything he wants. He then blows her a mocking kiss that puts out all the light in the dungeon, abandoning her in the darkness. ("And They Lived...")

1 of 8
Add photo
Retrieved from "https://onceuponatimeabc.fandom.com/wiki/Jabberwocky?oldid=84820"
Community content is available under CC-BY-SA unless otherwise noted.