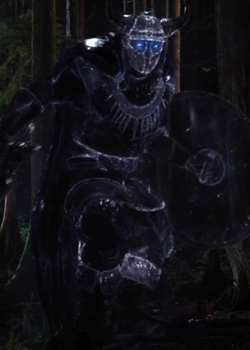 The Ice Warrior is a "snowman" created by the Snow Queen that is used to battle Emma and Regina. It appears in "Breaking Glass".

At the cliff edge, Emma and Regina are seen getting to their feet and dusting themselves off with the former asking the latter if she's okay. Regina doesn't respond, having seen something ahead, and Emma again says her name, wondering what it is that's the matter. Regina points out that they have a bigger problem than what they've just been through, and Emma turns to see the giant Ice Warrior (the "snowman" earlier referred to by the Snow Queen) just up ahead, blocking their path. He turns to them, his eyes glowing blue, and stomps his enormous foot. He then bangs his axe hard against his shield, ready for a fight.

Emma and Regina remain faced with a ferocious Ice Warrior, who stomps his way towards them. Regina remains frozen to the spot whilst Emma runs round to the other side of a tree as part of some sort of battle coordination plan. The two ladies give each other a slight nod, proving this to be the case, and Regina proceeds to summon a large fireball in her hand and throw it at their adversary. He stumbles back, and then turns to Emma, who summons light magic in her palms. She throws a big burst of it at him and he flies back into a tree as a result, his arm and axe smashing. Emma then runs over to Regina's side, watching as the Warrior regrows his limb, and the weapon with it, and points out that that's a problem. Regina agrees that it's not helpful, and so the blonde suggests that they try again... together. The Ice Warrior moves towards them in a feral manner as Regina begins to emanate a red light from her hands, and Emma, white. They then focus their respective magics in two separate beams, hitting the monster simultaneously and forcing him backwards. He tries blocking their attack with his shield, which is now on fire, but the two ladies continue to focus their energies together and, eventually, the Ice Warrior is reduced to nothing but a large puddle. ("Breaking Glass")

Retrieved from "https://onceuponatimeabc.fandom.com/wiki/Ice_Warrior?oldid=60306"
Community content is available under CC-BY-SA unless otherwise noted.