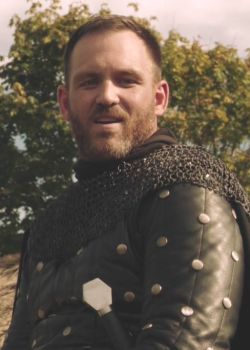 Hordor is the lead knight of a group of guards with allegiance to the Duke of the Frontlands who collected children to fight in the Ogre's War when they became of the correct age. If necessary, he used the magic of the Dark One to help take the children. When he came to collect Baelfire, he was brutally murdered by Rumplestiltskin, who had obtained the Dark One's powers.

Rumplestiltskin, among others, witness guards drag a young girl named Morraine from her parents. The parents beg them not to take her, but Hordor assures the parents that she's a fine strong girl and will make a fine soldier. The father states there must be a mistake as his daughter is only fourteen, but Hordor explains that it's orders of the duke, as the ogre wars have taken a turn for the worst. Rumple's son explains that they lowered the age again. As Hordor Morraine onto his horse, the parents try to take her back by pulling out a knife, claiming they can't have her. However, they are suddenly stopped by a mystical power that begins to choke them. Everyone looks over to a dark hooded man on a black horse enacting the spell with a magical staff. Pleased, Hordor states that the "dark one" thinks he can take Morraine. He then tells the Dark One to stop the spell and then he rides away, leaving Rumple and his son terrified, as the latter's birthday is in three days.

Rumplestiltskin wakes up his son, Baelfire, as he sleeps at night, and tells him they’re leaving now. The two then escape in the night, eventually coming to a road. They are suddenly stopped by the sound of horses running. They attempt to hide in a ditch on the side of the road, but the guards on the horses have already seen them and order them to stop. Hordor asks what they’re doing on the King’s Road, so Rumple lies, saying they’re going to sell some wool. Hordor gets off his horse and claims to recognize Rumple, so he asks for his name. He mocks possible names, so Bae defends his father, stating his name is Rumplestiltskin. Hordor recognizes this name as the one belonging to “the man who ran”. He asks how old Rumple’s son is, so Bae bravely states he’ll be fourteen in two days time. He tells Bae the story of how Rumple ran away from the war and left his fellow soldiers for dead, something that shamed his wife so much she left him. Rumple begs the man not to talk that way in front of his son. Hordor states it’s treason to avoid service so demands they take Bae now. Rumple begs him not too and offers anything. He tells Rumple he has nothing to offer but fealty, so orders him to kiss his boot. Rumple is ashamed at first, but complies. All the guards laugh at Rumple and then Hordor kicks Rumple to the ground before riding away.

After Rumplestiltskin kills the Dark One and takes his powers, the guards arrive to collect Baelfire. As Hordor exits Rumple's house with Baelfire, he jokingly tells another guard that everyone is hiding behind their curtains today. The guards chuckle but suddenly stop when one of them is stabbed from behind...killing him. Rumplestiltskin is the murderer. Hordor recognizes him as the Dark One and bows before him. Hordor suddenly begins to notice it's not the same man, so asks who he is. Rumple darkly asks if he's forgotten him already, so torments Hordor by recalling the insults he once called him. Hordor looks at the dagger and realizes it is Rumplestiltskin. Confused, Bae calls out "papa?". He tells Hordor that he shall be known as the new Dark One and then asks for fealty, placing his foot towards Hordor. Rumple tells the man to kiss his boot, so without question, Hordor leans forward to obey, however, Rumple grabs Hordor's head with one hand and twists it powerfully, snapping his neck. The remaining guards draw their swords to attack Rumple, scaring Bae, but Rumple glides around them with ease and stabs them all with his dagger in less than a few seconds. ("Desperate Souls")

1 of 7
Add photo
Retrieved from "https://onceuponatimeabc.fandom.com/wiki/Hordor?oldid=67076"
Community content is available under CC-BY-SA unless otherwise noted.