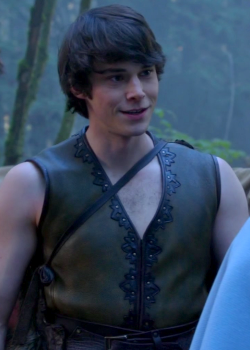 Hercules is an episodic character on Once Upon a Time. A demigod with super-human strength, he is the one who showed Snow White how to be the tough bandit she became, though he soon ended up dying while carrying out his twelfth and final labor. He ended up in the Underworld where he meets Snow again, and this time he completes his labors'.

Hercules is the son of Zeus, a god, and a mortal woman, making him a demigod. He has super-human strength and must complete twelve labors in order to ascend Mount Olympus and become immortal. His first labor is defeating the Nemean Lion, which he was only able to do by failing first and dropping his torch to singe its fur. He has faced eleven other challenges when he discovers the princess Snow White in a hunter's trap and rescues her. She was running from her subjects' complaints about bandits and he convinces her to face them herself, telling her about how he overcame his first labor when he initially applied himself and proceeding to teach her how to handle a bow and arrow. When Snow attempts to fend off the bandits though, she completely fails and ends up falling over at the mere action of grabbing an arrow from her quiver. Hercules has to punch the ground just to keep the bandits - who were actually hired by Queen Regina to make her stepdaughter look like an inept ruler - at bay, and Snow starts to commiserate her failure in private, being particularly harsh on herself. It is then that Hercules reveals the truth about his first labor; he didn't succeed on his first try, but in fact failed miserably like she did... which then led to his triumph. Due to the nature of the beast he was facing, he had to fail before he was able to succeed, and Snow has to do the same. When she faces the bandits again, things seem like they might go the same way as before, but then she disarms them with her arrows and compels them into running away. The people hail their princess as a hero, and she even shares her first kiss with the handsome Hercules before the two of them part ways. Hercules goes on to face Cerberus, his twelfth labor. He tries saving Megara from the three-headed hell hound, but it ends up defeating him; shortly after he dies, it kills Meg as well, and both souls were transported to the Underworld. ("Labor of Love")

Hercules works at the docks in the Underworld and takes his lunch break everyday at Granny's Diner, the owner of which leads an older Snow White - now Mary Margaret - to find him. She has come to the Underworld to rescue her daughter's true love, and thinks that maybe Hercules will be able to help to defeat Cerberus, for she knows it's his destiny to do so. She is unaware that facing Cerberus is how he died, and he is much too scared to face the beast again; however, the princess uses his own words against him, saying how he can't allow the fear of failure to stop him from trying, and he does exactly that: he tries... and fails. He ends up running from the beast and is confronted by his uncle, Hades. He returns to the docks in defeat but Mary Margaret comes after him again, knowing now how he died and also how they can defeat Cerberus once and for all... together. It has three heads, and so they simply need to kill them all at the same time. While Hercules kills one head with a pipe, Mary Margaret uses her bow and arrow on another and Megara stabs the last one. Not only was defeating Cerberus part of Hercules' unfinished business, but saving Meg was too, and with both now done he is able to finally ascend Mount Olympus. He says goodbye to Snow White, for that is who she wants to be once again, before going into the light with Meg. ("Labor of Love")

1 of 7
Add photo
Retrieved from "https://onceuponatimeabc.fandom.com/wiki/Hercules?oldid=108360"
Community content is available under CC-BY-SA unless otherwise noted.