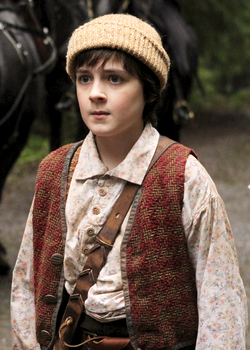 Hansel is the twin brother of Gretel. Together they were separated from their father when the Evil Queen kidnapped him.

Hansel and Gretel are helping their father in the woods, and before they leave, their father gives Gretel a compass pendant so that she's able to find her father again. Hansel and Gretel wander off on their own and decide that it's getting late and that they should get back to father, however, they are unable to find him, and to make matters worse, they bump into a carriage belonging to the Evil Queen. The initially try to run but the Queen soon catches them, and admires their moxie. She says that she will help them find their father if they do something for her in return, and the children agree. The Queen then leads the two young souls to a Gingerbread house - the home of the Blind Witch. Hansel and Gretel are told to retrieve a satchel from within the house but are warned not to eat anything, and so the two of them sneak in through the window. However, as Gretel tries to retrieve the satchel, Hansel eats a cupcake, and the Blind Witch wakes up. The Witch locks the twins up in a cell, wanting to cook them. She takes out Hansel and leads him over to the giant oven, but in retrieving the boy, she allows Gretel to escape, and the girl manages to push the Witch into the oven and lock her inside, before she can cook Hansel. The twins quickly retrieve the satchel and escape the house, and the Blind Witch is set alight within the oven by the Evil Queen, who's watching from her Magic Mirror. Hansel and Gretel head to the Queen's palace where they hand her the satchel, and she reveals a poison apple to be inside. They then ask about their father, but the Queen refuses to reunite them with him, and instead offers them a home in her castle. They refuse, wanting to be with their father and not someone so evil, and out of spite for the children, the Queen uses magic to transport them to an Infinite Forest, from which they shall never escape, and never be able to find their father. ("True North")

Ava Zimmer, Gretel's counterpart, encounter's the mayor's son Henry at the Dark Star Pharmacy and distracts him whilst her brother, Nicholas, the counterpart of Hansel, places some items into the boy's backpack. As they leave the store, they are caught by the pharmacist - Mr. Clark - who knows they robbed him. Henry realizes that Ava and Nicholas set him up and Regina and Sheriff Swan soon arrive on the scene. It is soon deduced that Henry is blameless for the crime and so the mayor takes him home, and Emma offers to do the same for the twins. Once they're home, they run inside, but are met by Emma who asks them where their parents are. However, Ava sadly reveals that they don't have any. After this, Emma takes them to her and Mary Margaret's apartment, after having learned that their mother passed away recently, determined to find the twins' father. She soon gets the idea to use an heirloom to do so, and Ava reveals that her mother gave her her father's compass, and that it's the only thing they have of his. Emma then goes to Mr. Gold with the compass to see who bought it originally, and he leads her to a mechanic named Michael Tillman, who she manages to find in town. She explains the situation, however, he refuses to take responsibility for Ava and Nicholas, and so Emma is forced to drive the two of them out to Boston to separate care homes, something which Regina arranged. On their way out of town, Emma's car breaks down, and so she calls in Michael to come and fix it. Once he arrives, he meets his two children, and decides to step up and be a father to them. Ava and Nicholas go home with their father, another sign that things are changing around Storybrooke thanks to Emma. ("True North")

1 of 20
Add photo
Retrieved from "https://onceuponatimeabc.fandom.com/wiki/Hansel?oldid=95847"
Community content is available under CC-BY-SA unless otherwise noted.