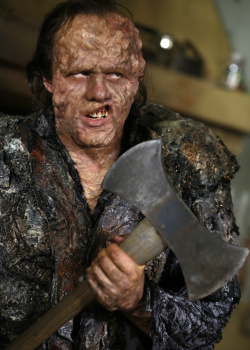 The Grendel is a name given to a monster who used to be a happy and handsome man. When he lost his wife he stole an item from the Red Queen to be with her again. However, as punishment, the Red Queen transformed him into a horrible beast.

The Grendel was once a handsome man married to a beautiful woman and they lived together in a small house hidden within the Whispering Woods of Wonderland. One day, the handsome man returned home to his wife with animals he hunted for dinner. She is amazed and the two embrace. Before they start to prepare dinner the handsome man tells his wife a story and she is delighted to hear it. This interaction between the beautiful couple is the last to happen in this particular part of the house, as soon after, the wife dies for unknown reasons. Feeling he'll die of a broken heart, the handsome man steals the Forget-Me-Knot from the Red Queen. He uses it to watch his last interaction with his wife, however, the Red Queen turns him into a hideous beast as punishment for stealing from her. He then gets a horrible reputation as the Grendel, who eats people. ("Forget Me Not")

After a visit with the Caterpillar, Alice and Will learn that the Grendel has the Forget-Me-Not. On their way there, Will explains to Alice that he's heard nothing good about the monster. When they reach the house, they fall into one of the Grendel's traps and are knocked unconscious. The Grendel ties them up and keeps them hostage in his house, preparing them to be eaten. While the fire for the stove burns, the Grendel sits and watches the knot, reminiscing of his past with his wife. Will notices this and realizes a way to escape. He tries to talk to the beast and sympathizes with him as he knows what it's like to lose the one you love. When he tells the Grendel he need to move on to stop the pain, the monster gets angry and decides to speed things up. He goes to collect more firewood, giving Alice and Will a chance to escape. However, just as they're about to leave, he catches them. As they open the door, a Bandersnatch sent by Jafar and the Red Queen arrives. It attacks the Grendel, but Will and Alice manage to kill it. Thankful, the Grendel hands over the knot to his saviors. He later gets a visit from Jafar and the queen and he reveals that Alice and Will were at his house in hope of being reunited with his wife. Jafar then kills the Grendel and he is finally united with his wife in death. ("Forget Me Not")

1 of 10
Add photo
Retrieved from "https://onceuponatimeabc.fandom.com/wiki/Grendel?oldid=113287"
Community content is available under CC-BY-SA unless otherwise noted.