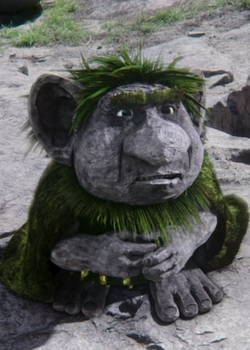 Grand Pabbie is a minor character on Once Upon a Time. He is the leader of a race of trolls in Arendelle known as the rock trolls. With the unique ability to remove and regain lost memories, Pabbie is often sought out by people who are in need of his help.

After Ingrid, a royal princess of Arendelle accidentally freezes and kills her sister Helga, their younger sister Gerda traps Ingrid inside a magical urn to prevent her from harming anyone else. Gerda then visits Grand Pabbie and he listens to the plight of the royal princess as she expresses sorrow over losing her two older sisters. Pabbie tries to console her and questions how this happened, but Gerda refuses to talk about it as it's too upsetting. Gerda then requests a memory potion from Pabbie that will be powerful enough to wipe everyone in Arendelle's memories of her two sisters. Pabbie agrees to help her, but her warns that the truth has a way of coming out one way or the other and there will be a magical price extracted at her expense. Gerda consents, stating she's already paid that price, and soon after, all of Arendelle forget about Ingrid and Helga. ("The Snow Queen")

Years later, Gerda becomes the Queen of Arendelle and ends up having two daughters, Elsa and Anna. Elsa soon begins exhibiting ice powers, the same as her older sister Ingrid once did, so in fear she and her husband decide to visit the Enchanted Forest, known as Misthaven, to find a solution. They take the voyage under the guise of a diplomatic mission to the Northern Isles, but the royals reveal to Pabbie of where they are actually headed. On the return home, Gerda and her husband die in a tragic storm at sea, making Elsa the next Queen of Arendelle. Years later, while planning Anna's wedding to Kristoff, the sisters discover their mother's diary, which talks about their reason for traveling out of Arendelle being Elsa's magic. Anna and Elsa consults Grand Pabbie for answers and he admits that their parents left for the Enchanted Forest, but the reason for going is not known to him as they kept it a secret. ("A Tale of Two Sisters")

The next time Anna visits Grand Pabbie, she brings her new friend, Belle, who came in search of returning a lost memory about her mother's death. Pabbie uses his magic to extract the memory from Belle's head and he transforms it into a stone. He instructs her to return to the place where she lost her memory and boil the stone into a tea and drink it. With Belle's matter settled, Anna privately asks him about Ingrid, who is claiming to be their aunt. Grand Pabbie reveals that Ingrid is telling the truth as her mother, Gerda, actually had two sisters, Ingrid and Helga. He explains to Anna that the three sisters were often seen playing together as children, but for an unknown reason to him, the eldest two vanished which prompted them to be removed from everyone's memories. Pabbie informs Anna of this, but he obscures that it was Gerda who requested her sisters' existences to be wiped clean. Worried for Elsa's safety and suspecting Ingrid is up to no good, Anna abruptly leaves with Belle. ("Family Business")

Retrieved from "https://onceuponatimeabc.fandom.com/wiki/Grand_Pabbie?oldid=93146"
Community content is available under CC-BY-SA unless otherwise noted.