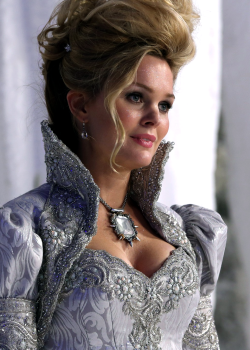 Glinda, also known as the Good Witch of the South, is a minor character on Once Upon a Time. Once the ruler of Oz along with two other good witches, Glinda was banished to the Enchanted Forest after Zelena, the Wicked Witch of the West, took a harsh disliking to her. This was after Glinda attempted to help the Wicked Witch mend her ways, having believed her to be the savior talked about in her Book of Records, but ended up carelessly tossing her aside in favor of Dorothy. She was sought out by Snow and Charming when Zelena threatened their baby, and gave them advice which led to the casting of the second Dark Curse.

Zelena watches as Rumplestiltskin tries to teach Regina how to cast a spell. Glinda comes in and points out that Zelena is wasting her power, trying to go back in time, and suggests that Zelena come with her. Glinda takes Zelena to meet her sister witches from the North and East. There is a fourth empty seat at the west and they'd like Zelena to fill it. Then, Glinda explains that the Book of Records foretells that a powerful sorceress will come to Oz in a cyclone and be a powerful protector. Glinda tells Zelena that she's always been meant for more and she can do it if she lets go of her past. Zelena returns to the Emerald Palace and conjures an image of Regina again. After a moment she says that she's over Regina. Glinda appears and offers her a pendant. She tells Zelena to guard it with her life because it is her life, and the pendant will let her harness and protect all of her power. Glinda welcomes her to their Sisterhood and gives her a mirror, and Zelena watches as her green skin fades away.

Later, Glinda takes Zelena to the West, her new land. A cyclone appears and a house drops out of it. When the two witches go to investigate, they find the ruins of a farmhouse and a young girl. She introduces herself as Dorothy Gale. Sometime later, Dorothy enjoys a meal with the Sisterhood and they all welcome her. Zelena watches from the shadows and Glinda notices her. She goes to her and Zelena turns, her skin partially green. Zelena accuses them of fawning over their newest protégé, and Glinda assures her that no one is taking her place. Despite her denial, Zelena opens the Book of Records. According to the prophecy, the Witch of the West will defeat the great evil that Oz has ever seen. Zelena believes that she is the greatest evil, but Glinda tells her that only she can shape her evil.

Later, Zelena - now fully green once more - confronts Dorothy as she is taking water from a well. Zelena attacks her with a fireball. Dorothy throws her bucket of water on her and Zelena melts to nothing. Dorothy decides to come back to Kansas, and Glinda accepts to help her.

Behind them, Zelena reforms. Glinda and Dorothy arrive at the Emerald Palace and the Wizard appears to them behind his curtain. He makes the silver slippers appear and Dorothy uses them. Then, Glinda invites Walsh to show himself... and Zelena steps out. She explains that she tricked Dorothy into leaving so that no one could stop her, and Glinda vows to find someone else to stop her. Zelena banishes her to the Enchanted Forest. ("Kansas")

Rumplestiltskin tells Snow White and those on her royal council that the only way to defeat Zelena - who poses as a threat to Snow's unborn child - is to find Glinda, the Good Witch of the South who was banished north of the dark forest. Snow, Charming and Regina soon find the door leading to Glinda's snowy realm of exile, but the Queen is unable to enter due to her heart being heavy with vengeance. The royal couple ask the Good Witch if her light magic is capable of defeating Zelena, but Glinda replies negatively, explaining that she is not powerful enough to counteract the Wicked Witch's magic, which is all stored in the magical pendant she wears around her neck at all times. Snow and Charming asks for further advice, and Glinda tells them that only light magic born of true love can defeat Zelena, and they realize that they need to re-enact the Dark Curse to get back to their daughter, Emma, who such magic resides within. ("A Curious Thing")

1 of 11
Add photo
Retrieved from "https://onceuponatimeabc.fandom.com/wiki/Glinda?oldid=111515"
Community content is available under CC-BY-SA unless otherwise noted.