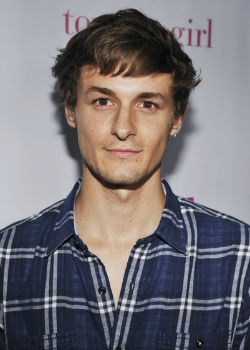 Giles Matthey is a supporting actor on Once Upon a Time, portraying the role of Gideon/Gideon Gold.

Matthey was born in Australia to a British father and an Australian mother. He moved to London with his family at the age of 2. Matthey has one sibling, an older sister, Arabella, who is a Security Consultant. He became interested in acting during his teenage years, and eventually moved to New York City. In the United States, Matthey completed a two-year conservatory program at the Lee Strasberg Theatre and Film Institute.

Matthey's first acting job was an appearance in The Good Wife in 2011. In 2012, he was cast as Claude Crane in the HBO series True Blood. Matthey appeared in nine episodes from 2012 to 2013. He also had a supporting role as Apple design chief Jonathan Ive in Jobs, and a lead role on the 2014 independent film Boulevard with Robin Williams. In 2014, Matthey was cast as CIA intelligence analyst Jordan Reed in FOX limited event television series 24: Live Another Day. He also appeared in the CBS drama series NCIS playing Daniel Budd, a young man who is the leader of the terrorist group, "the Calling". His role on NCIS ended when his character died in the season 13 premiere episode as Budd was shot dead by NCIS Special Agent Anthony DiNozzo, played by Michael Weatherly.

In July 2016, it was announced Matthey had been cast as Morpheus on the ABC series, Once Upon a Time, although it was later revealed that he's actually the son of Belle and Rumplestiltskin, Gideon.

Gallery of behind the scenes stills released to promote the actor.

Retrieved from "https://onceuponatimeabc.fandom.com/wiki/Giles_Matthey?oldid=108973"
Community content is available under CC-BY-SA unless otherwise noted.