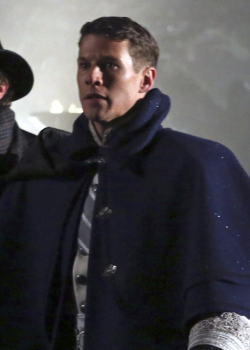 Gerhardt Frankenstein is a minor character on Once Upon a Time, as well as the resurrected brother of Viktor Frankenstein.

In the land of black and white that was, Gerhardt is seen clinking glasses with Viktor and Alphonse after receiving a silver cross, something his father is blatantly proud of. After watching Alphonse ridicule Viktor once more, he follows his brother out into the night and offers him their mother's watch, to which Viktor promptly disagrees, stating he had another way. Meanwhile, Rumplestiltskin watches on from the distance. Sometime later, Gerhardt finds Viktor at a grave site, digging up a corpse, and is completely shocked by his actions, unwilling to support his experiments anymore. From across the graveyard, an armed man tells the two to halt and begins to shoot even when Viktor explains that Gerhardt is a man in uniform. The two escape into the carriage and ride off, Viktor noticing that his brother is unconscious. He looks closer to see that his brother had retained a bullet to the gut and is now dead. Back in the lab, Viktor tries to revive his brother but fails due to the heart being burned beyond use. Alphonse storms in, claiming that Viktor was seen carrying in a dead body and demands that Viktor to explain himself. He is horrified to see that the body is Gerhardt's and that Viktor has been operating on him. The two get into a screaming fit until Alphonse disowns his son, leaving a shamed Viktor to be. ("In the Name of the Brother")

There is a thunderstorm above a castle type building which is hidden in the mountains. Inside is a laboratory type room with lots of highly technical equipment. The doctor walks towards the operating room, where his assistant is standing, going through equipment. "Doctor, you've returned" the assistant says in a state of shock. He asks the doctor if he found what he was looking for, he is told he did. The doctor shows his assistant the glowing enchanted heart, saying it's remarkable. The assistant asks if it's the final piece to the puzzle, so the doctor says he thinks it is. "Let's begin" the doctor announces as he moves towards a long table with a body on it, covered by a large cloth. As lightning strikes the castle type building they are in, their equipment begins to power up. The doctor pulls a switch that activates a large static ball. He pulls another switch which causes the static ball to emit electrical discharges, striking the body. The body jolts about as it is electrocuted. The procedure soon finishes. Both the men look at the corpse on the table and are then astonished to see it raise it's arm into the air. "It's alive" the doctor says victoriously. The doctor grabs the hand, which is clearly stitched together from different body parts. The assistant tells the doctor that he did it. "Yes, I believe I have" he says. He then welcomes his brother back. "It's magic, Dr. Frankenstein" the assistant claims. The doctor is then revealed to be the infamous Dr. Viktor Frankenstein. However, Dr. Frankenstein states that it isn't magic, but science. ("The Doctor")

After receiving the magic heart from Rumple, Victor excitedly tells his father that he has indeed risen the dead by presenting the resurrected Gerhardt to him, however, he is shown to be a speechless monster. Alphonse is completely disgusted by his resurrected son and scolds Victor for actually letting him believe that he had Gerhardt back. He begins to yell at him, calling Gerhardt a monster and the latter attacks Alphonse, savagely beating him until he dies, Victor tells his brother that he just killed their father. Later, Gerhardt is seen being kept in a cell and Victor walks in with a loaded revolver in tow. He points it towards his brother's neck but his brother, wanting this to happen, re-aims the gun at his forehead. Victor hesitates at this and ends up not shooting his brother, insisting that there must be another way to bring him back and that he will find it, before leaving. Gerhardt is disappointed that he is kept alive. ("In the Name of the Brother")

During Regina's therapy with Dr. Hopper, Whale bursts in the office Archie tells him he's being highly inappropriate, but he just ignores this. Whale tells Regina to send him back, bemusing Regina. He sternly demands the queen send him back to his brother. Regina suggests checking the "missing board", but Whale points out that Regina's curse only brought the living. She sarcastically apologizes for his loss and then explains she can't send anyone anywhere. Whale asks if she "can't or won't". Archie stands up from his chair and insists Whale leave. Whale looks at him, so Archie yells "go!". Whale finally obliges and Archie closes the door behind him. Later, Whale goes see Mr. Gold for his missing arm. Whale tells Gold that he thought if he helped Regina then she might send him back to his land and brother. He explains he wants to see his brother so he can bring him back again. "Again?" Gold asks, so Whale explains the first time ended badly. Gold explains that is beyond her abilities and then offers his condolences. ("The Doctor")

1 of 3
Add photo
Retrieved from "https://onceuponatimeabc.fandom.com/wiki/Gerhardt_Frankenstein?oldid=113190"
Community content is available under CC-BY-SA unless otherwise noted.