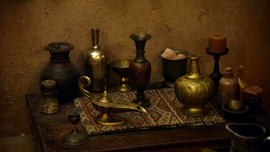 Genie Lamps, also referred to as Bottles are the homes of numerous genies from Agrabah. When rubbed by a person, the genie will emerge from its bottle and be forced to serve whomever found them, granting them three wishes.

Centuries ago, Cyrus angers some men who burn his house down, injuring his mother. Feeling guilty, he and his brother's set out to collect water from the Well of Wonders. Despite Nyx's warning, they take the water and save their mother. Nyx then arrives and curses the three brother's to be genies, sending them across the land. ("Dirty Little Secrets") In the Enchanted Forest, King Leopold finds a lamp containing the Genie of Agrabah. He sets him free, but the genie falls in love with his Queen Regina wife, and ends up killing the king for her. ("Fruit of the Poisonous Tree") Amara becomes a powerful sorceress and teams up with Jafar to track down the three genie's bottles. They manage to get two, but sensing they're near the end of their goal, Jafar betrays Amara and turns her into his staff. ("The Serpent") Rumplestiltskin keeps a lamp in his castle when he takes in Belle as his maid. ("Skin Deep") TBA ("Heroes and Villains") Jafar finally tracks down the third bottle, but the owner gives up his final wish to wish it far away before he can retrieve it; this sends Cyrus to Wonderland, where his bottle lands in the royal maze. ("Trust Me") After returning to Wonderland to find proof, Alice finds herself on the run from guards in the maze. She shrinks herself and hides in the bushes, only to find the bottle and Cyrus inside. ("Down the Rabbit Hole") She becomes his new master and he grants her three wishes. They eventually fall in love, but Cyrus worries when she's spent her wishes she'll be done with him. They bury the bottle near the Dandy Lion, unaware that the White Rabbit saw them. ("Trust Me")

Not long after the creation of the curse, Regina enters Mr. Gold's shop, where Sidney's lamp resides, in a rush, setting off the door's bell. She tells Gold, who is cleaning a tea pot, that she's not happy, to which he promptly replies that Dr. Hopper's office is down the street. She tells him she doesn't want to talk to Dr. Hopper, she wants to talk to him. He asks her what she wants to talk about, and she tells him, as he moves to put the pot back in its place, "This town... this isn't the deal we made." Gold places another piece of the same tea set on the counter and tells her he doesn't know what she's talking about. She doesn't believe him right away, but then she can tell from his look that he just might be telling the truth. He goes on to dust the pieces of the set as she walks around the store, telling him that she was supposed to be happy there. He reminds her that she's the Mayor, the most powerful person in the town. He asks her what there is to be unhappy about, and she answers that everyone in town does exactly what she wants them to. He scoffs and asks if that's a problem, and she says that they do it because they have to, not because they want to. "It's not real." He then asks her what she wants exactly, and she says, "Nothing you can give me." He looks further confused, and she starts to walk away. ("Welcome to Storybrooke")

After the earthquake which caused the Storybrooke Mines to collapse, Mr. Gold is seen walking around his shop behind the counter. As he does so, he walks past a genie's lamp, which is placed next to the puppet forms of Donna and Stephen. ("That Still Small Voice") When David enters Gold's shop and regains his memories of Kathryn by looking at a windmill, the lamp is sat on a shelf. ("The Shepherd") When Emma enters Gold's shop to find out the identity of Ava and Nicholas' father, Mr. Gold is seen polishing a genie's lamp at his desk. ("True North") As Gold checks the inventory in his shop, he picks up a genie's lamp, but he's interrupted when Emma enters, asking for legal help for Mary Margaret. ("Heart of Darkness") When August and Geppetto are in Gold's shop together, although the latter is avoiding interaction, the lamp is rested in one of the shelves in a glass case. ("The Stranger") With Emma now knowing the truth about Storybrooke, and needing to save Henry, she and Regina enter Gold's shop to collect Charming's sword. As he gives the savior the sword, the lamp is rested on a counter next to them. ("A Land Without Magic")

After Alice returns to Wonderland, Jafar informs the Red Queen that they must find Cyrus' bottle and make Alice use her three wishes. ("Down the Rabbit Hole") Jafar hears word that the bottle is at the Tum Tum Tree, but this turns out to be a false location spread by Alice. Meanwhile, the Red Queen threatens the White Rabbit to get her the bottle, for her knows where it is. Once she receives the bottle, she locks it away, keeping it secret from Jafar. ("Trust Me") Once retrieving the Forget-Me-Knot, Alice and Will use it to see who stole the bottle off them. They discover that it was the White Rabbit who gave it to the Red Queen. ("Forget Me Not") Tweedledum attempts to steal Cyrus' bottle from the Red Queen for Jafar, but the sorcerer is enraged to discover it's a fake. Meanwhile, the Red Queen collects the real bottle with Cyrus and they meet with Alice and Will. Jafar sends a storm to kill the queen, but she uses the bottle to deflect a lightning bolt. The bolt hits Will. He and Alice slowly begin to die, so Will uses a wish to end Alice's suffering. This releases Cyrus from his tether to the bottle, but Will replaces him as the new genie. The bottle is sent down a river. ("Home")

The bottle is found by Liz, who becomes Will's master. However, when one of her wishes becomes lethal, Will is sent back to his bottle, which is later found by Anastasia. She sets Will free and becomes his new master. ("Nothing to Fear") After discovering that Anastasia now has the bottle, Jafar sends the Jabberwocky to kidnap her. The Jabberwocky tortures Ana, forcing her to use her three wishes, thus allowing Jafar to become Will's new master. ("Dirty Little Secrets") Now the owner of all three bottles, Jafar attempts to enact his spell, however, something prevents him from doing so; the fact that he doesn't have his heart. ("Heart of the Matter") Jafar releases Taj and Rafi from their bottles to gain valuable information. Later, after a magical fight with Amara, Jafar manages to fatally wound Cyrus, forcing his old ally to help him enact his spell, for it will be able to bring her son back. Together, Amara and Jafar use the three bottles enact the spell that will break the laws of magic. ("To Catch a Thief") Jafar releases Will from his bottle to taunt him over the fact that Ana loves him now. Later, Jafar is defeated and cursed to an eternity in a bottle as a genie. Will, Rafi and Taj are thus released from their bottles, free at last. ("And They Lived...")

In a dream, in Gold's shop, Henry blows out the candles on his birthday cake as his family all cheer and clap behind him. The boy smiles before being approached by Rumple, who tells him it's time for his present. Henry appears intrigued as Gold tells him to pick one object from his shop; anything he likes, and Henry begins to wander around the establishment, browsing the items within it. He looks upon the counter, seeing objects such as the golden egg that the true love potion was kept in and the Genie of Agrabah's lamp, but his eyes move across the till and eventually settle upon a rack filled with a selection of magic wands. He points to one and says, "That," before reaching out his hand and selecting a wand. He begins to swing it around randomly and his father warns him to be careful as wands are powerful, and Henry turns to Mr. Gold, asking him how it works. Gold carefully takes the wand out of the boy's hand, requesting to let him show him, and begins waving it above Henry's head as it begins to glow with golden magic. As Henry grows entranced by the wand, Gold soon gives it a violent flick and casts a spell upon the boy, causing him to turn into a ceramic sculpture. He then proceeds to smash the boy into thousands of pieces. ("Lacey")

TBA ("Quite a Common Fairy")

Retrieved from "https://onceuponatimeabc.fandom.com/wiki/Genie_Lamps?oldid=107757"
Community content is available under CC-BY-SA unless otherwise noted.