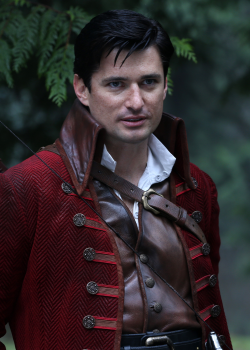 Gaston is a minor character on Once Upon a Time. A vain and arrogant hunter, both of wild game and of women, Gaston was originally set to marry Belle... until she saw his true colors, and wanted very little to do with him. This mattered not to her parents, who still arranged for the two to be wed, but luckily she was able to escape the union by ending up the maid of Rumplestiltskin in the spoils of a deal. When Gaston attempted rescue via her methods, he died, and his experience in the Underworld is no more pleasant. He ends up being pushed into the River of Lost Souls by his former beloved.

Belle is approached by her father, Maurice, in regards of setting up an arranged marriage between her and Sir Gaston, whose own father's army is needed in a current battle against the ogres that threaten their kingdom. Belle is hesitant, especially given the information she has taken in about her potential suitor, but Gaston wishes to put these worries to rest during a walk. Things don't go as Belle expected, for the two of them hit things off rather well, but when a baby ogre is found stuck in a hole, Gaston believes it to be a spy and wishes to bring it back to the castle for interrogation. Belle, however, knows it'll simply be tortured, and so she disagrees. She convinces her potential husband-to-be to consult a magical antiquities book in order of finding a way to prove the ogre's innocence, which she is successful with, having found a magical mirror to do the trick. Belle and Maurice set out for the mirror, but when returning they find Gaston collapsed on the ground and the ogre gone. Everyone believes this to be the ogre's fault, but when the ogre is found, the mirror reveals that it was in fact Gaston's, who tortured the ogre in her absence until it broke free. Belle is appalled by this and refuses to let the ogre be harmed, allowing it to get away. Later on, however, it's revealed the ogres have breached the eastern region and that war is now unavoidable. Despite being very resentful of Gaston due to his treatment of the ogre, Belle still agrees to marry him, for the sake of her kingdom. ("Her Handsome Hero")

Sir Gaston is shown with Sir Maurice as it seems all hope is lost in the war, a noise is soon heard at the door. Gaston, Maurice and Belle approach it but nothing is there when it is opened, they turn to see that Rumplestiltskin is sitting in the throne. As Maurice and Rumple converse, Gaston begins to draw his sword, and, when Rumple names his price of defeating the ogres as Belle, Gaston puts his foot down. He tells the deal maker that Belle is engaged to him but Rumple reminds Gaston that that's not what he asked. Belle agrees to go, and, when her fiancé and father try to stop her, she reminds them that she chooses her own fate. ("Skin Deep") One day, whilst living as Rumple's prisoner, Belle runs into her childhood friend, Samuel, who reveals he is trying to rescue her, per requests from Maurice and Gaston. However, this means trapping the Dark One in Pandora's Box, and also obtaining the dagger, which he has his own intentions for. ("Out of the Past") Later, Gaston shows up at Rumple's castle for Belle, however, Rumple, who has grown a fancy towards Belle, is completely non-threatened and uses his magic to turn Gaston into a lovely red rose. Rumple gives the rose to Belle who is appreciative. He asks her about her betrothed and she tells him that her and Gaston's relationship was that of an arranged marriage and that she could never really give her heart to someone as superficial as he. ("Skin Deep")

After dying, Gaston's soul is transported to the Underworld, where he works at an animal shelter. Years later, however, when Rumplestiltskin travels to this realm in order to rescue Captain Hook, Gaston is approached by Hades with a chance to finally get revenge. Gifted with arrows dipped in the River of Lost Souls, Gaston sets out on a quest to kill the Dark One. He finds Rumple with Belle at the local pawn shop, where he reveals to Belle that the Dark One had killed him. Rumple poofs himself and Belle to safety, but Belle refuses to let dark magic be used in getting Gaston out of the way. She instead wishes to help him move on to Mount Olympus, believing it to be the key to weakening Hades. She and Rumple break into his locker at the animal shelter where Belle learns that Gaston's unfinished business is her, and so she confronts him at the pawn shop. He reveals that it was because of him trying to follow in her footsteps that he got himself killed. Gaston comes to realize that Belle has long since fallen in love and married Rumplestiltskin since their last encounter, but things take a turn for the worse when Rumple learns of a deal Hades had offered Belle. If she were to let Rumple or Gaston push the other into the River of Lost Souls, then he will let Belle keep her unborn child. Rumple takes Gaston captive, preparing to do away with him, but Belle saves her former fiancé in time. With that though, Gaston uses this as a chance to kill Rumple, but Belle once more intervenes, this time shoving the man she was once to marry into the River of Lost Souls herself. Because of this, not only has Gaston been condemned to an eternity of torment, but the deal with Hades is still valid, for it was Belle who pushed Gaston into the river, not Rumple. ("Her Handsome Hero")

1 of 12
Add photo
Retrieved from "https://onceuponatimeabc.fandom.com/wiki/Gaston?oldid=113249"
Community content is available under CC-BY-SA unless otherwise noted.