Start a Wiki
Game of Thorns 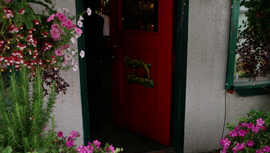 Game of Thorns is a flower shop in Storybrooke, run by the real world counterpart of Maurice.

In Storybrooke, Moe French (Sir Maurice's counterpart) steps out of his florist's van to deliver some flowers, however, he is greeted by Mr. Gold and his lackeys, who have apparently been looking all over for him. "I'll have your money next week," Mr. French says, but Mr. Gold says that his terms were fairly specific. "Take the van," Mr. Gold tells one of his employees who bows and obliges. "Wait! No! Tomorrow's Valentine's Day! The biggest day of-" Moe stops as the man gets into his van. Mr. french stands in front of the van and tells the man now inside it to stop, the engine starts, "You've gotta let me sell them!" Moe exclaims to Gold who seems not to care in the slightest and begins to walk away, "This is not the way to do business, Gold!" Moe yells and Mr. Gold walks away. The van revs its engine and Moe tries to stop it. The vehicle speeds away after Mr. French yells at Gold, telling him that people aren't going to put up with this. He is left standing on the street. ("Skin Deep")

After an argument with Rumple, Belle finally reunites with her father, Maurice, after she is mysteriously kidnapped by William Smee, who Maurice had hired to bring her to him. However, he is unhappy Belle is in a relationship with the Dark One, and sends her off to an underground mining car so she will inevitably cross the Storybrooke town border and lose her Enchanted Forest memories. Rumple enlists the help of temporary sheriff David to find the missing Belle, and Ruby is able to track her scent to Maurice's shop. They confront him, and he fesses up to his crime. After rushing off to the mines, Rumple saves Belle, while she is stuck in an out of control mine cart, by magically puling her to safety. ("The Crocodile")

Wanting to leave Storybrooke, Henry steals the keys to Emma's car, which is parked outside the Game of Thorns flower shop. Before he can leave though, Hook stops him, offering another solution to his problem. ("A Curious Thing")

Retrieved from "https://onceuponatimeabc.fandom.com/wiki/Game_of_Thorns?oldid=93525"
Community content is available under CC-BY-SA unless otherwise noted.