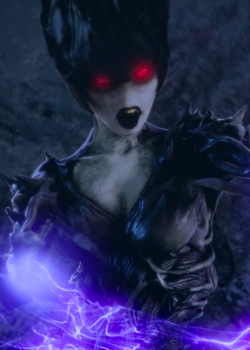 The Fury are demons from the Underworld that are sent to the mortal world to collect an unpaid price of magic. One attempts to steal Robin's soul after Regina fails to pay for the magic Emma uses to save him.

Robin Hood is collecting sticks for firewood which will be used at the camp site, and so is his son, Roland. As he reaches to the ground and picks up a bunch of sticks, a large demonic creatures hovers down from the sky and floats behind him. He's distracted for a moment because he's looking over towards Regina, who is talking to Snow, but when he hears its low growling sound, he turns around. The creature, which is a Fury, roars in his face and startles the whole camp, including Roland, who calls out for his father in fear. Robin calls out Regina's name for protection, but before she can run over to him, he's grabbed by the creature and taken away into the air at lightning speed. Regina wraps her arms around Roland and then watches in horror as the beast takes away her true love.

"This way!" Charming yells while running through the woods, followed closely by King Arthur, Regina, Snow and Grumpy. They continue running and Arthur points out the direction the Fury is flying with Robin. Regina teleports herself ahead of the others to catch up with the beast, and the others slowly follow behind. Once she's near the Fury, it drops Robin to the ground and he lays unconscious. She angrily tells the beast it isn't taking Robin, throwing a fireball at it. The Fury dodges the attack and slams Regina into a tree, but she gets up and prepares to throw more fireballs at it, claiming she loves the "hard way". However, the beast simply flies at her, slamming her heavily into another tree, injuring her head. It then grabs Robin and flies away just before everyone else catches up. Snow calls out for Regina and approaches her, asking if she's okay. A distressed Regina says she's alive, if that's what she means. Noticing she's injured, Snow states she needs help. Charming asks Grumpy to get her to the hospital, but she refuses because she has to go after the "thing" with Robin. However, Snow repeats that she has to get checked out, "You don't believe I can do this?" Regina asks, thinking that's what she means. Snow assures her friend they won't let anything happen to Robin, repeating once more that she has to let someone look at her. After a pause, she gives in and tells the group to go.

The Fury drops Robin by the side of a lake so it can summon a portal to the Underworld. Mist magically appears on the water, and out of it appears a boat with a hooded figure on it. However, Snow, Charming, Grumpy and Arthur arrive, hoping to stop the monster. Instead they're knocked to the floor by a magical pulse, allowing it time to suck Robin's life force away. However, Regina arrives and runs towards the Fury, offering her life in place of Robin's. The Fury changes its target to Regina and begins sucking away her life force, causing a worried Snow to ask what she's doing, "What I should've done in Camelot" she replies. Snow rushes to Regina's side and tells her she doesn't have to do this alone, "I'm with you" she says before grabbing Regina's hand, causing the demon to start sucking her life force too. Charming joins in too, and then he's soon followed by Grumpy and Arthur. The demon starts sucking all five of their life forces at once, but it becomes too powerful for it to control and its magic ends up exploding back on itself, sending it flying away. The portal to the Underworld proceeds to close and the hooded figure on the boat vanishes. ("The Price")

Retrieved from "https://onceuponatimeabc.fandom.com/wiki/Fury?oldid=76528"
Community content is available under CC-BY-SA unless otherwise noted.