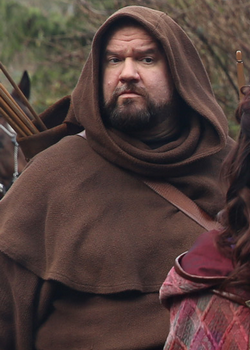 Friar Tuck is a minor supporting character on Once Upon a Time. He is one of Robin Hood's loyal Merry Men, who joins him on adventures to steal from the rich. He acted as an injured man during one of their heists.

Robin of Loxley joins together a gang of thieves known as the Merry Men, notoriously known for stealing in order to get by. One day, the Merry Men go to a poor farm where they steal a horse, which happens to be the farmer's only source of income. Robin encounters the farmer's daughter, Maid Marian, and feels guilty for stealing the horse. He ends up giving it back, along with one of his own to make up for his and the rest of the Merry Men's actions. Robin goes on to enter into a relationship with Maid Marian, but this doesn't blow over well with the Sheriff of Nottingham, who is not only Robin's arch-nemesis, but also Marian's former boyfriend. Robin and Marian eventually decide to get married, doing so in a church with all the other Merry Man - including Little John and Friar Tuck - there to see. Because of his new found life with the farmer's daughter, Robin decides to put his days of thievery behind him and goes into the tavern business, working to build a quiet life with the woman he loves. This, however, does not permanently work out, and so Robin returns to the Merry Men, but now the group just steals from the rich to give to the poor. ("The Snow Queen"/"Heart of Gold")

When Will Scarlet wishes to join Robin Hood's Merry Men, they give him a test robbery to see if he has what it takes. Little John, Friar Tuck and another Merry Man create a diversion on a road, where they pretend that Friar Tuck has injured his leg. A carriage, ridden by a wealthy man stops to help, and as they distract the driver, Will uses his stealing skills to take two bags of golden treasures. Later on, the men celebrate their successful robbery, mocking the look on the driver's face when he saw the "blood" on Friar Tuck's leg, which turns out to have been berries. After Will is initiate and officially becomes a Merry Man, he manages to convince Robin Hood to steal from Maleficent. The Merry Men go together and raid Maleficent's castle, however, they have strict instructions to only steal the gold and nothing more, as magic is something they don't involve themselves in. They manage to steal the gold, but Will sneaks a looking glass from the witches castle. As the Merry Men celebrate again, they receive a warning from Maleficent, stating that she wants her magical item back, not caring about the gold. The Merry Men are shocked that someone stole selfishly for themselves, and it's later revealed that Will was the thief. ("Forget Me Not")

The former residents of the Enchanted Forest who were sent to Storybrooke, Maine after the casting of the Dark Curse are sent back home after the curse is undone by Queen Regina to defeat Peter Pan. Now, groups of people are returning to the Enchanted Forest, and when Regina goes off on her own to bury her heart in order to stop feeling pain over losing her son, Henry Mills, she is followed by Snow White, who stops her. The two are then attacked by a flying monkey, but Merry Men Robin Hood, Little John, and Friar Tuck save the day. The three men join Regina and Snow back to their group, and journey with them to the Dark Palace, but soon discover someone else has been taking residence inside. Since safety comes first, Robin Hood suggests everyone join him and the Merry Men in Sherwood Forest for the time being. ("New York City Serenade")

As they group, including Friar Tuck, depart from Sherwood Forest, a flying monkey attacks them, but Queen Regina defeats the winged beast by turning it into a stuffed animal, which she gifts to Robin Hood's son, Roland. During a group discussion, which Friar Tuck listens to, Belle shares her knowledge of the flying monkey's origins in the land of Oz, thus leading to Regina determining the person in the Dark Palace is none other than the Wicked Witch of the West. The group, including Friar Tuck, conduct a plan: Regina will infiltrate her palace and remove the shield while the group waits for a signal from the Queen. Once night falls, and Regina succeeds, Grumpy gives the signal, meaning everyone can continue assembling towards their destination. ("Witch Hunt")

A year after all the Storybrooke residents are transported back to the Enchanted Forest to escape Pan's curse, they all are sent back to the seaside town, having lost a whole year worth of memory as well, but this time those not effected by the curse the first time join them as well. Friar Tuck and the other Merry Men decide to set up camp in the woods; one day, Little John is seen showing off a crossbow he stole from a store, but when he attempts to catch a meal by shooting a wild turkey, he utterly fails. Tuck and the other Merry Men follow Little John as he chases after the animal, but once getting near the town line, he is kidnapped by a flying monkey. Emma Swan sends Friar Tuck, the other Merry Men, David, and Hook out to search for Little John, and they soon fin him unconscious in the woods with a sustained bite wound; they take him to the hospital. Once there, however, Tuck and the others witness Little John turn into a flying monkey, resulting in him taking off. ("Witch Hunt")

Regina Mills entrusts Robin Hood and the other Merry Men, including Friar Tuck, to protect her heart from Zelena, and while on watch-duty one day, Rumplestiltskin arrives, following Zelena's orders, and tries to convince them to turn the heart over, stating that he will have no choice but to arm them otherwise. At the worst possible time, Robin's son, Roland, shows up, and so Rumple decides to use the young boy as leverage, threatening his life if the Merry Men don't turn the heart over. Robin fires his arrow at the Dark One, but Rumple, seeing it coming, uses magic to redirect it to hover inches from piercing Roland. Helpless to stop him, Tuck is only able to watch as Robin turns over the heart for Roland's safety, and once the Dark One leaves, Regina arrives. While Robin goes to explain to Regina what had happened, he leaves Roland in the care of Tuck. ("Bleeding Through")

The heroes return home from their quest to the Underworld but all isn't well: Hades is loose in Storybrooke and intent on ruling it alongside a redeemed but duped Zelena, all by the use of the Olympian Crystal, the only weapon capable of killing a God. It makes it so that the person whose beam it hits experiences no afterlife; they don't go to the Underworld or ascend Mount Olympus, but are simply wiped out of existence permanently with no hope of revival. As such, when it strikes Robin Hood, Regina is understandably devastated. While this does prompt Zelena to come to her senses and run Hades through with his own weapon, Robin remains forever gone, and a funeral is held for him the following day. Friar Tuck, Roland and the other Merry Men are all in attendance, with everyone placing a flower-decorated arrow on the archer's coffin as a symbol of their shared remembrance. ("Last Rites")

After Robin Hood's death as the result of a powerful magical weapon, Henry decides that magic is the root of all unhappiness in his family, and so he goes on a quest to destroy it. This becomes known to the townspeople, and Merida goes to the Charmings in a panic because she fears that, without magic, she, the Merry Men and the Camelot folk will have no means of getting home. David assures that Emma and Regina are currently tracking their son down, meaning he won't succeed in his mission, but Merida still frets that maybe they won't get to him in time and it'll be too late for everyone stuck in Storybrooke. As such, Snow decrees that they are all to be sent home immediately, and Zelena uses the Apprentice's wand to open a portal door back to the Enchanted Forest. Friar Tuck and the other Merry Men are among those to go through it, wishing to return to their previous lives in Sherwood Forest now that Robin is dead. ("Only You")

1 of 6
Add photo
Retrieved from "https://onceuponatimeabc.fandom.com/wiki/Friar_Tuck?oldid=95260"
Community content is available under CC-BY-SA unless otherwise noted.