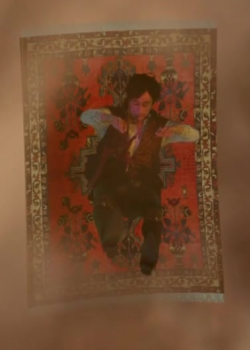 The Magic Carpet is a magical flying carpet owned by Jafar which he uses to travel around Wonderland and in his quest to get Alice.

When in search for the genie, Cyrus, Jafar flies to Agrabah on his magic carpet. When he arrives he kills Cyrus' current owner as he's unable to obtain the bottle. ("Trust Me") When the Red Queen pushes Cyrus off a cliff and down towards the Boiling Sea, leaving Alice to think that he is dead, Jafar turns out to be waiting on the cliff side with his magic carpet. As Cyrus falls, Jafar uses the carpet to catch him and take him prisoner. ("Down the Rabbit Hole")

Jafar flies to the Red Queen's palace on the carpet. He asks if Alice has returned, which the queen confirms she has. Jafar then deems the queen as useless, so he proceeds to choke her, however, when she points out that he doesn't know where she is, he lets her go. Angry, she tells him to leave on his carpet, gloating that this is her world, not Agrabah. Jafar then flies back to his hideout on his magic carpet, where he smiles menacingly at his prisoner, Cyrus. ("Down the Rabbit Hole") Jafar flies out to the Mimsy Meadows on his magic carpet so he can search for Cyrus' bottle, however, he doesn't find it. ("Trust Me")

Retrieved from "https://onceuponatimeabc.fandom.com/wiki/Flying_Carpet?oldid=113477"
Community content is available under CC-BY-SA unless otherwise noted.