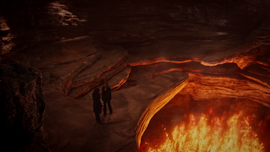 The fiery cave is a place in the Underworld where a cavern of fire leads people to the worse place, unless they've resolved their unfinished business and judgment decides that they should be able to move on to Mount Olympus. In this case, the flames dampen and a pathway appears into the light.

In an attempt to get her to leave the Underworld, Cora transports her daughter Regina to the fiery cave and throws her lackey Blacktooth into the flames, thereby transporting him to a worse place. She says that she will do the same to Regina's father, Prince Henry, if she doesn't go, but Regina refuses to give in to her mother's blackmail. As such, Cora later has the flames consume Henry, only for them to then disappear after she's gone. The cavern of flames then transforms into a bridge, leading to a bright light, for Henry has now finished his unfinished business and helped Regina to redeem herself. He bids her goodbye, as well as his grandson Henry Mills, before making his way over the bridge and into the light. ("Souls of the Departed") Mary Margaret, while re-adopting the identity of Snow White, helps Hercules resolve his unfinished business too by having him defeat Cerberus, and save Megara in the process. This also resolves whatever Meg was clinging onto, and so they all head to the fiery cave where the bridge forms again. Snow watches happily as Hercules, along with his new love, proceeds to enter Mount Olympus, where he always wanted to live. ("Labor of Love")

Captain Silver's crew kidnap Liam and Killian Jones thanks to the former causing their deaths, and threaten to throw them into the fire. However, Hades shows up and blows Silver into the fire instead, and then he tries getting rid of Liam too. It doesn't work though, to Hades' pain, and the fire turns to water. A ship waits in the distance, waiting to take the crew to a better place, and Liam and the others board a smaller boat in order to sail off to the bigger one and subsequently sail to Olympus. Hook decides to stay behind to help defeat Hades, who has disappeared by this point. ("The Brothers Jones") When Cora resolves her own unfinished business by having Regina and Zelena make amends, she goes to the fiery cave to see if judgment will take her to the better place of the worse one. After saying her goodbyes, she walks the outstretching ledge and becomes consumed by fire; however, it soon gives up and the bridge forms, and she smiles at her daughters before finally moving on. Regina and Zelena, meanwhile, share a hug and manage to work out their differences, in light of what their mother has now done for them. ("Sisters")

Retrieved from "https://onceuponatimeabc.fandom.com/wiki/Fiery_Cave?oldid=96441"
Community content is available under CC-BY-SA unless otherwise noted.