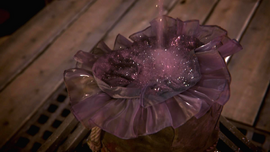 Fairy Dust and is enchanted dust that is mined by dwarfs and given to fairies to allow them to concoct spells. Pixie Dust is a type of fairy dust that is much stronger.

Centuries ago, Rumple and his father find themselves in Neverland, a place the latter used to go to as a child. He realises he'll need pixie dust to fly, so goes and finds some. While collecting dust, he makes a deal with the Shadow. The shadow turns Malcolm into a boy, who becomes Peter Pan, and Rumple is taken away from him. ("Think Lovely Thoughts") Many years later, Tinker Bell helps a heart broken Regina find true love by stealing pixie dust which locates her soul mate, Robin Hood. However, the Blue Fairy discovers this theft and removes Tink's wings. ("Quite a Common Fairy") While on the run from the Evil Queen, Snow comes into the possession of dark fairy dust, which she plans on using against the queen. However, when Prince Charming is attacked by trolls she uses it to turn them into cockroaches. ("Snow Falls") After Nova, a fairy, accidentally drops some fairy dust on a dwarf egg, Dreamy is born with the ability to love. Dreamy and his fellow dwarfs mine fairy dust for the fairies as it is their jobs. ("Dreamy") Belle is given fairy dust by Dreamy in case she needs it on her journeys. She later uses it to return the Yaoguai to its human form. ("The Outsider") Fairy dust is used by dozens of fairies when they help attack King George's castle; the dust is used to knock out guards. ("An Apple Red as Blood") Now battling Regina in war, Snow and Charming get help from the Blue Fairy, who uses dust to freeze Regina, enabling her capture. ("The Cricket Game")

While on their way to find Cyrus, Alice and Will come across a large lake in their way. They summon the fairy Silvermist, who has a shaky past with Will, and she agrees to take them across the lake. She sprinkles fairy dust on them, allowing them to fly, and she escorts them over the water. However, she removes the dust from Will, dropping him into the water, forcing Alice to go after him and save him. ("Trust Me") The Red Queen approaches Alice and offers her a deal; if she retrieve some magical dust that will help protect her against Jafar, then she will help her locate Cyrus. However, while trying to retrieve the dust she falls into a deep pit. She is confronted with a vision of her child self, but she looks dirty and evil. The child Alice orders her older self to kill the queen, but when she refuses to, she passes the test. The child Alice then dissipates into dust... the dust the Red Queen wanted. They both take a portion of the dust and the Red Queen uses it to return Will to his former self, while Alice uses her to locate Cyrus. ("Heart of Stone")

After Snow and Emma are sent to the Enchanted Forest, the seven dwarfs work hard to find fairy dust in the Storybrooke Mines to bring them back. Grumpy eventually creates a large hole in the wall. David, Henry and Blue soon arrive and witness the discovery of diamonds in the mine. A happy Blue explains that magic can be brought back through them if the diamonds are refined and ground up. ("Child of the Moon") Rumple points out to Regina that they should probably stop a portal from being opened as Cora, who is with Emma and Snow, could get through. He tells the mayor that if all goes wrong when she was trying to help, it would make her look very appealing in the eyes of Henry. They later go down into the Storybrooke mines to collect the magic diamonds. Rumple transfers them into magic using the Fairy Godmother's wand and the two of them concoct a spell over the town well where the portal shall open so that if anyone were to come through, they would surely not survive. ("Queen of Hearts") When "Archie" is found to be dead, the blame is pointed towards Regina. Regina denies this, but when Pongo's memories are extracted, it's shown that Regina killed him, although it's unknown that it was Cora in disguise. As a result of this they attempt to imprison the mayor with magic. Blue tries throwing fairy dust at her to freeze her, but having this happened to her before, she's able to defend herself and escape. ("The Cricket Game")

Immediately after the Jolly Roger crew set off for Neverland, Belle is tasked with enacting a shield around Storybrooke to prevent people entering. She enters the mines and after the dwarfs dig a pocket to the fairy dust, she pours a potion into it that creates the shield. ("Dark Hollow") After Henry is brought to Neverland by Greg and Tamara, his captors are soon killed by the Shadow and Lost Boys. Henry escapes and runs into Peter Pan, in disguise, who claims to have stolen pixie dust that doesn't work. The chase takes them to a gorge in the Echo Caves and Henry insists if you believe in the pixie dust then it will work. The two boys jump and the dust starts working, allowing them both to fly away to safety. ("The Heart of the Truest Believer") When everyone is on board the Jolly Roger as they go home, Wendy gives Tinker Bell a vial of dead pixie dust. Later, as Tink and Regina talk, they notice the pixie dust glow, but only for a moment. ("Save Henry") After returning to Storybrooke, Regina orders the Blue Fairy to give Tink her wings back. Blue claims that due to the fact that Tink is unable to believe in herself and make the dust glow indefinitely, then she herself cannot believe in her. ("The New Neverland") At the funeral of the Blue Fairy, the Shadow attacks and Tink is able to get the pixie dust working. Now able to fly, she captures the Shadow and goes on to defeat it; reviving Blue. ("Going Home")

In a twisted version of the past, Emma Swan and Captain Hook find themselves interrupting the moment the former's parents, Snow White and Prince Charming met for the first time. After Emma gets them to meet, albeit unconventionally, Snow and Charming bond and she tells him of the dark fairy dust she wears around her neck, which she plans to use on Regina. As Red Riding Hood helps the others break into the Dark Palace, Snow heads up to the throne room in order to confront the Evil Queen. She throws the dark fairy dust at Regina, but she simply uses her magic to stop it, ordering that Snow be arrested on the spot. Snow is tied to a stake by the Queen's guards and burned alive by one of Regina's fireballs, however, she uses the dust on herself, which transforms her into a ladybug, and flies away in this form. The Queen is furious when she finds out, going on to use the sample of dust that Snow earlier tried to use on her on a group of trolls who failed to kill the bandit. She turns the trolls into cockroaches and steps on them. ("There's No Place Like Home")

Retrieved from "https://onceuponatimeabc.fandom.com/wiki/Fairy_Dust?oldid=107994"
Community content is available under CC-BY-SA unless otherwise noted.