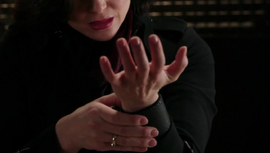 The Enchanted Cuffs are a magical item that are primarily used for blocking the magic of whomever wears one on their wrist. They were also used to allow Captain Hook and Emma Swan to climb the magically protected Beanstalk.

Cora enchants a pair of cuffs so that she and Captain Hook are able to climb the beanstalk together, for it is magically protected; however, Hook instead gives Cora's cuff to Emma Swan and climbs the beanstalk with her to get the enchanted compass from the Giant's castle. ("Tallahassee") When Hook comes to Storybrooke following Cora's death, Cora's daughter Regina notices that he's wearing one of her mother's cuffs on his wrist, and she demands that he give it to her. He does, and she later learns that it's been tricked out by Greg and Tamara with the "toughest metals and machinery known to man" (although it's more likely that Peter Pan, their unbeknownst leader, re-enchanted it) to counteract her magic - meaning she can't perform any so long as the cuff remains on her wrist - and also to make it impossible to take off herself. ("The Evil Queen") When Regina is recovered from Greg and Tamara's torture chamber, the Blue Fairy successfully removes the cuff from her wrist. ("Second Star to the Right")

When Peter Pan switches bodies with Henry Mills, a plan is put into practice by the latter's loved ones to switch them back. To do this, they're first going to need the Black Fairy's wand, which is in the possession of the now deceased Blue Fairy. However, she is resurrected when Pan's shadow is killed by Tinker Bell, and she hands over the very powerful wand in gratitude. To make sure that Pan doesn't try anything funny once he's put back in his own body, Mr. Gold places Greg and Tamara's cuff on his wrist, meaning that he won't be able to perform magic. Regina has an annoyed reaction to see the cuff again. Soon enough, Gold wields the wand to return Pan and Henry to their own bodies, and when Pan wakes up he's simply able to remove the cuff and do magic anyway since he himself designed it for Greg and Tamara. He then transfers it onto Rumple's wrist and leaves to kill his loved ones. However, Rumple uses a sword to cut off his hand and then magically reattaches it, thus getting rid of the cuff and allowing him to go outside and stop Pan before he's able to act. ("Going Home")

Following a debacle in which Zelena posed as Robin Hood's dead wife Marian and got impregnated by him, Regina hauls her back to Storybrooke where she is to be contained in one of the cells beneath the hospital. To make sure that she can't escape, Regina has the enchanted cuff placed on her wrist, thus ensuring that she won't be able to perform any magic. Zelena remains in her cell and, later, Regina comes to visit her along with Isaac, threatening to have the latter write her out of existence with his magic quill and ink. Zelena fears the worst, but ultimately Regina spares her, assuring the Wicked Witch that she doesn't need Isaac to write her a happy ending because her life is happy enough as it is - and Zelena can't do a thing to ruin that. ("Mother")

The cuff remains on Zelena's wrist as she stays in her cell. When Regina, Robin and Hook pay her a visit, needing her to wield the Apprentice's wand in order to save Emma because she's the only one with enough darkness in her heart to do so, Zelena says that she'd be happy to - but she's going to need the cuff removed first. Regina refuses to ever let that thing off her half-sister's wrist and leaves. However, Hook later returns and tries taking the Wicked Witch's heart, thereby being able to force her to use the wand to save Emma. He soon learns that he can't due to a protection spell on her heart, and she ends up stealing his knife and using it to chop her hand off. The cuff falls off with it and she reattaches her hand magically, teleporting out afterwards. After Zelena has summoned a portal with the wand, Regina uses the ensuing moment of weakness to slap the cuff back on her wrist, able to manipulate the portal to take it where she wants. ("The Dark Swan")

Zelena demands that the cuff be removed upon entering Camelot with the others, but Regina just takes her voice instead of acquiescing. ("The Price") She continues to wear it during an argument with Regina regarding her unborn baby. ("Siege Perilous") She continues to wear it still while sitting silently through the heroes' strategy planning session. Regina returns her voice so that she can tell them how stupid they're being, explaining how she had a lot of time to look around Camelot while pretending to be her sister's mute maid and thus she knows a way in. She leads them all to it and Regina is shocked that Zelena hasn't screwed them over yet... but then she knocks out Mary Margaret, who's standing guard, and takes her prisoner, revealing herself to be working with the evil King Arthur. He removes her cuff so that she can do magic for him. ("Nimue") After Emma makes Hook into a Dark One she teleports everyone to the diner and wipes their memories so that, when the Dark Curse hits, they don't recall the events of the last six weeks spent in Camelot. When Zelena returns to the diner, Emma uses her magic to put the cuff back on her wrist. ("Broken Heart")

Zelena is still wearing the cuff when everyone returns to Storybrooke and witnesses the rise of the Dark Swan. ("The Dark Swan") The Dark Swan later busts Zelena out of her cell and offers to remove the cuff, but Zelena would rather stay put than serve someone else. ("The Bear and the Bow") After her pregnancy is sped up following her meeting with Emma, Zelena, in labor, begs for Regina to remove the cuff so that she can protect herself and her child. However, Regina refuses to give her sister an inning, meaning the Dark Swan is able to easily kidnap her once she's given birth. Zelena is chained up in Emma's basement along with Hook, but thanks to his hook being enchanted he's able to use it to remove the cuff and then Zelena uses her magic to help the both of them escape. ("Birth") Hades uses a cuff on Cora to force her to work the mills in the Underworld, but Hook hides his hook in some straw which she then uses to get it off. ("Sisters") Pan and Rumple use a cuff on Zelena when they take her hostage, but it is removed by Hades following her rescue. ("Firebird")

Retrieved from "https://onceuponatimeabc.fandom.com/wiki/Enchanted_Cuffs?oldid=112450"
Community content is available under CC-BY-SA unless otherwise noted.