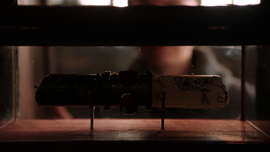 The Enchanted Candle is a magical relic that Cora once used in an attempt to turn Snow White dark, but was later used by Snow to kill Cora, thus saving Rumplestiltskin's life in her place.

With her mother dying, Snow White is told by Johanna to seek help from the Blue Fairy, a magician who Queen Eva once had a connection to. Snow does so, and the Fairy offers the Princess a more unorthodox way of saving her mother. Giving her an enchanted candle, the Blue Fairy tells Snow that it can be used to save the Queen, but the Princess will be forced to sacrifice another life in return. The Blue Fairy makes Snow promise to never share their meeting with anyone, and Snow takes the candle; however, she soon becomes reluctant, for she wishes her mother to see the good in her. She ultimately goes against using the candle, and Eva is proud of her daughter for doing so. The Queen soon dies though, and Snow mourns her loss. The Blue Fairy makes an appearance at the funeral when alone, however, and it turns out she was Cora in disguise the entire time. She makes it clear to the deceased Queen that the candle was merely a test, but that she plans to turn Snow's heart black as coal, and destroy the legacy Eva hoped to leave behind. ("The Queen Is Dead")

Cora is now a threat amongst those of Storybrooke, and she is now plotting to kill an already-dying Rumplestiltskin so that she can become the Dark One. The heroes work together against her and Regina though, but as Rumple can tell time is running out, he takes matters into his own hands by directing Mary Margaret in the direction of the enchanted candle. He instructs that she take it to Regina's vault, get Cora's heart, light the candle of it, and whisper Cora's name repeatedly before blowing it out. She does so, and as Cora is about to kill Rumple, having defeated the others, Mary Margaret gives Regina her mother's heart, instructing her to give it back to her. Regina does so, not knowing what Mary Margaret has done, and after a brief reunion, Cora ends up dying in Regina's arms. Though Rumple is now cured, Mary Margaret is wrenched with guilt, and is exactly who Regina blames. ("The Miller's Daughter")

The people of Storybrooke are now being faced with a new villain, that being Cora's first born daughter, Zelena. The heroes have now joined together once again to put a stop to the havoc being wreaked in town, but needing some answers first, Regina goes to the pawn shop where she obtains the enchanted candle from Belle. Regina calls for Mary Margaret, Emma, David and Hook, all of which partake in a ritual, with the candle as the centerpiece, to contact a deceased Cora. The portal between the realms opens up, and Regina calls for her mother, but receives no answer. Soon enough though, the call is ended when Hook accidentally bumps the table, and so Regina is left disappointed, assuming her other doesn't want to speak to her. That's far from the case though, for Cora has actually sneaked through the portal and is there to get revenge on Mary Margaret for killing her. However, she ends up telling her everything that happened to Zelena when she was born, thus allowing the heroes to move forward in their plans to defeat the Wicked Witch. ("Bleeding Through")

Retrieved from "https://onceuponatimeabc.fandom.com/wiki/Enchanted_Candle?oldid=110506"
Community content is available under CC-BY-SA unless otherwise noted.