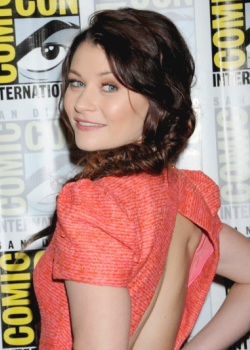 De Ravin was born in Mount Eliza, Victoria, Australia, an outer southeastern suburb of Melbourne. Having studied ballet since the age of nine at Christa Cameron School of Ballet in Melbourne, and being home schooled by her mother, she was accepted into the Australian Ballet School at fifteen, where she performed in productions with The Australian Ballet as well as Danceworld 301. She studied acting at Australia's National Institute of Dramatic Art, and with the Prime Time Actors Studio in Los Angeles.

De Ravin's first major role was a recurring part as Curupira in the TV series Beastmaster. She went on to appear as alien/human hybrid Tess Harding in the teen television series, Roswell. She landed this role one month after moving to Los Angeles at the age of 18.

In 2004, De Ravin was cast to portray Claire Littleton on the hit ABC drama Lost. Speaking about the success of Lost, she said: "It's sort of hard to say. You read something and have a good feeling about it, it sounds great, ties nicely together and then shooting something, editing it, the music, the actors involved, everything sort of plays a huge part. Everyone involved had a great feeling towards it, but you never really know." She was a series regular for the first four seasons and the sixth and final season. She was not a regular in season five but was under a holding contract with ABC Network.

In 2005, De Ravin was cast to portray Emily Kostich, the heroin-addicted ex-girlfriend of Brendan Frye (Joseph Gordon-Levitt), in the neo-noir film Brick. In an interview about the film, Ravin told that she was attracted by the script because it was original and the teens in the film are very deep and emotional for their age.

A year later, De Ravin had a lead role and was cast as Brenda Carter in the remake of The Hills Have Eyes. The film performed well at the box office. In 2007, Variety reported that she would be starring in the film Ball Don't Lie, which premiered at the 2008 Tribeca Film Festival, which arrived in cinemas early 2009. De Ravin appeared in William Dear's The Perfect Game, and appeared in the 2009 film Public Enemies as a bank teller named Barbara Patzke.

De Ravin was cast in the movie adaption of the video game Onimusha, but due to producer Samuel Hadida's other project The Imaginarium of Doctor Parnassus, and star Heath Ledger's death, Hadida was forced to push back the release date of the film. Onimusha is postponed for an unknown amount of time and there is not any confirmation if De Ravin will continue the project. De Ravin filmed Remember Me in the summer of 2009. The film received its wide release on 12 March 2010.

In 2012 she guest starred as Belle on the ABC fantasy drama, Once Upon a Time. After sporadic appearances in the first season, she was promoted to a series regular in the second onward.

De Ravin starred in the Finnish film Love and Other Troubles, directed by Samuli Valkama. The film tells the story of Ville (Jussi Nikkilä) and his father (Ville Virtanen), who both fall in love with the same woman, played by De Ravin. She was to star as Anthony LaPaglia's character's daughter in the new drama series Americana in 2012, but ABC passed on the pilot.

After three years of dating, actor Josh Janowicz proposed to De Ravin on New Year's Day 2003 in Melbourne, which she said "was very impromptu and very sweet". She met Janowicz in Los Angeles, and said that "our life together always comes before work. You can't buy love or family." While filming Lost, De Ravin flew to and from Hawaii "once or twice a week" to return to her home in Burbank, California, which she shared with Janowicz and their poodle.

The couple married 19 June 2003 (not 2006, when they had a public celebration) in Melbourne, Australia. They separated six months after they married, and then reconciled. In June 2009, it was reported that they were living separately and had filed for divorce. In October 2009, she called off the divorce after a trip to Japan with her husband. On 8 July 2014, de Ravin filed for divorce from Janowicz.

According to court documents, the pair wed on 19 June 2003, despite their wedding ceremony on 26 June 2006; the documents further confirm that the couple separated on 1 November 2013.

On October 3, 2015, de Ravin announced via Twitter that she was expecting her first child with her boyfriend Eric Bilitch. On March 12, 2016, she gave birth to a baby girl named Vera Audrey de Ravin-Bilitch. The couple announced their engagement on July 6, 2016.

On May 12, 2017, de Ravin announced via Instagram that she would not be returning to Once Upon a Time for the seventh season due to the production team deciding to "move in a different creative direction."

Retrieved from "https://onceuponatimeabc.fandom.com/wiki/Emilie_de_Ravin?oldid=113726"
Community content is available under CC-BY-SA unless otherwise noted.