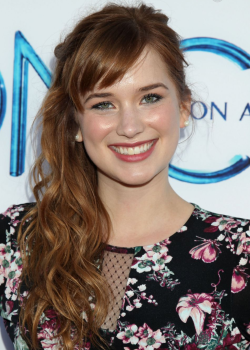 Elizabeth Lail is one of the supporting actors of Once Upon a Time, portraying the role of Anna.

Elizabeth Dean Lail was born in Williamson County, Texas, to her parents, Dean Franklin Lail and wife Kay Lurene Surratt, a distant cousin of John Surratt. She has one older sister, Kathryn Dean Lail. They moved to Asheboro, North Carolina, from where her ancestors hailed.

After graduating from Asheboro High School, Elizabeth began studying acting at the University of North Carolina School of the Arts in 2010, and finished school in May 2014.

Her acting career debuted in 2011 when she appeared in the short film, Model Airplanes. Since then, her only other acting credit is the short film, Without. Lail moved to New York to pursue stage work when she landed an audition for Once Upon a Time and was cast in the role of Anna.

1 of 38
Add photo
Retrieved from "https://onceuponatimeabc.fandom.com/wiki/Elizabeth_Lail?oldid=86597"
Community content is available under CC-BY-SA unless otherwise noted.