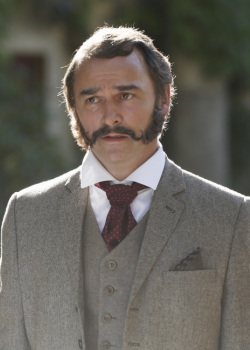 A rabbit hole explodes in the ground in the middle of some woods, next to an abandoned child's tea party that appears to have been left for a very long time. A young Alice emerges from the hole, having just returned from her very first visit to Wonderland, and joyfully states that she's home. She then runs across a fallen tree trunk, acting as a bridge, and then she proceeds to speed through a vast open field. She eventually reaches a long road and begins to call out for her father as she gets closer to her home. She attempts to open the door, but it's locked, so she knocks heavily on it, calling out for her father. He eventually opens the door and is shocked to see his daughter, who tells him that he won't believe where she's been. As she begins to tell the story of where she went, her stunned father asks if its really her, stating that everybody thought she was dead because she was gone a very long time. Later on, Alice overhears as her father talks to a psychiatrist, Dr. Lydgate. Knowing they don't believe her, Alice vows to herself that she will prove that Wonderland is real. ("Down the Rabbit Hole")

After visiting Wonderland a second time, Alice is sent back to her world and emerges from a hole in the ground at the same spot she did as a child. Having just lost her true love, she breaks down and begins to cry, however, she's found by a young girl named Millie. The girls parents arrive, searching for her, and Alice is shocked to discover that they both share a father. Alice and father reunite after many years and then he awkwardly introduces Alice to her new family. Once they return home, Edwin questions how long Alice will stay, to which she says forever, as there's nothing left for her in Wonderland. Concerned by this comment, Edwin asks Alice to not speak of Wonderland again for the sake of Millie. During a family dinner, Alice's new mother, Sarah, suggests that Alice meet a new man to begin her future, but the mention of this idea horrifies Alice, who refuses as she's still heartbroken. That night, during her sleep, Alice has nightmares about the death of Cyrus and she calls out for him. Millie hears this and asks her who he is, so Alice tells her the truth. However, Edwin and Sarah overhear this, frustrating them and they ask Alice not to mention it again. In the morning, Sarah introduces a young boy to Alice in hopes that they hit it off, however, Alice storms out, refusing to talk to him. Her father follows and she realizes that he doesn't believe her about Wonderland. Edwin gives his daughter a choice, marry the boy or go to an asylum. Alice chooses the asylum. She is later picked up by Dr. Lydgate in his carriage and they had to London. Alice refuses to let her father visit and then she leaves without saying goodbye. As the carriage drives off, she watches Edwin, Sarah and Millie together as a family, the family Alice never had herself. ("Who's Alice?")

In the present day of Alice's London, England realm, a man with a gloved hand knocks on the door of Alice's old house. Edwin soon answers, and not recognizing the man on other side, asks if he can help him. The man, who turns out to be Jafar, still dressed in the suit, states that he can help Edwin instead. A confused Edwin asks if they know one another, but Jafar explains that he knows his daughter and where she went after escaping from the asylum. A shocked Edwin asks if he's seen Alice, so Jafar confirms this, adding that he can take him to her. He then gives Edwin a cold look. ("Who's Alice?")

Jafar brings Edwin to Wonderland, via the White Rabbit's portal. However, his original plans are changed once he learns that Alice's relationship with her father is strained, so Jafar has Edwin detained in his lair. He takes some of Edwin's blood for a potion to transform into Alice's father. He soon reunites with his "daughter", but she is not too happy to see him. He later talks with Will, wondering how to fix his relationship with Alice. Will suggests Edwin help find Cyrus, the key to Alice's happiness. Later, whilst Alice and Will are busy building a flying basket to get them to Jafar's lair, Jafar in disguise casts a spell to summon a dragon-like creature to attack them. The trio flee, but "Edwin" is nearly caught by the beast until Alice kills it. The father and daughter reconcile at long last, and the trio spend the night eating the slain creature's meat. However, once "Edwin" does not pray before eating, Alice suspects that something is up. Jafar overhears her talking about this with Will, so he finally shows his true identity. Jafar also retrieves the real Edwin, and drops him into the sea, resulting in Alice using her second wish to send him home. Edwin wakes up, back home in Victorian England, where his wife Sarah finds him in the study. Edwin goes on about Wonderland, but Sarah tells him that it must have all been a dream. ("Bad Blood")

On her wedding day, Alice is seen in a wedding dress, looking through her mirror. Edwin comes in to check on her. He tells his daughter that she looks beautiful, and Alice asks if it is time. Her father says that it almost is, but first there is something he would like to say. Edwin tells Alice how pleased he is to have her back home, and how proud and happy he is to welcome Cyrus into their family. The father and daughter embrace in a hug. Edwin says that after returning from their time together that he thought it must have all been a dream, but he wants to thank Alice for proving to him that it was all real. "Wonderland?" Alice asks, but Edwin tells her that he meant forgiveness. Edwin is next scene walking Alice down the aisle. He then steps aside where he, Sarah, Millie, and friends from Wonderland watch Alice and Cyrus be joined in holy matrimony. ("And They Lived...")

1 of 26
Add photo
Retrieved from "https://onceuponatimeabc.fandom.com/wiki/Edwin?oldid=113592"
Community content is available under CC-BY-SA unless otherwise noted.