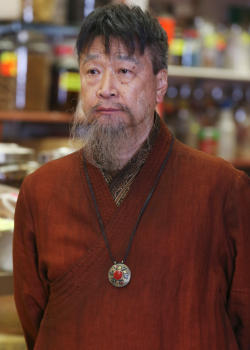 The Dragon is a minor character on Once Upon a Time. As a powerful man who somehow unlocked the secret to wielding magic in the land without magic, death was but a mere inconvenience, for the Dragon found himself still able to help and guide Storybrooke's heroes and anti-heroes in spite of certain minions attempting to put him down. However, his heart was soon coveted by the Evil Queen, who was more intent on using him as an assassin, all the while his past - where he is from and what family he has, such as a daughter who became lost to him - remains a mystery.

In Hong Kong, when August begins turning back into wood, and no one believes him, he is approached by a young man who tells him of the Dragon, a man who can supposedly help him. August goes to see the Dragon who knows what August's ailment is, and says that in exchange for his help, he will need a personal item. August hands over a necklace containing a wooden whale that's made with the puppet strings his father first carved him with, however, the Dragon then tells August that he'll be needing the addition of $10,000. That night, August goes to a bar and meets another patient of the Dragon's, Tamara, who has cancer and wants it cured. She reveals that the Dragon made her give him a photograph of her and her grandmother, and that she has the $10,000 in her purse to pay him. When Tamara takes a phone call, August snatches the money from her purse and dashes back to the Dragon's office where, in exchange, the Dragon gives him a magic potion that will cure him. However, Tamara steals it back. Tamara then goes to the Dragon and tells him that the potion contains no elements known on this world, and that it's magical. She also reveals that she never had cancer, and lied so that she could get close to a magical being. She says that, now she's discovered him, she can't risk anyone else doing the same, and pulls out a taser. The Dragon then starts to reveal his "true form" and flies towards her in an array of smoke. However, Tamara tasers him and he dies from the powerful electrocution he receives, and she then takes back the picture of her and her grandmother. Later, August returns to the Dragon's office to beg for a second chance, but he finds that he's already dead on the floor. Too wrapped up in himself to wonder what may have happened or who may be responsible. He simply runs away. ("Selfless, Brave and True") August later discovers that the Dragon had been researching about the author for years. He steals the research and a page containing the author. ("Poor Unfortunate Soul")

As it turns out, the Dragon is more resilient than first thought. He survived Tamara's taser and continued about his life, eventually relocating to New York. After Henry Mills destroys magic with the Dark Grail, Rumplestiltskin and Regina go to the Dragon in hopes that he still has enough magic left to help them save their loved ones from the Land of Untold Stories. He doesn't want to help Rumple, but he will help Regina because he senses an inner battle raging inside her which he'd like her to win. While the Dragon is able to view their family, he is not powerful enough to create a portal to get them back - he leaves that up to Henry, explaining how magic still exists in the land without magic, just not in an obvious way. It exists via belief, and as such, Henry gets a large group of people to "believe" and throw pennies into a fountain in the form of wishes. This restores magic and forms a portal that returns Snow, David, Hook and Zelena. Later, thanks to Regina using Dr. Jekyll's serum to separate herself from the Evil Queen, the latter shows up in the Dragon's shop and removes his heart, declaring her grand return. ("An Untold Story")

When the Dragon refuses to aid the Evil Queen, she traps him in the world behind the mirror, using the dregs of magic from his shop in New York to make her way and barge through to Storybrooke. As she spends her time terrorizing the Charmings, Regina eventually gains the idea to trap her in the world behind the mirror, only for the plan to be flipped on its head when the Queen, ever savvy to her other half's way of thinking, manages to make it so that Emma and Regina are the ones who become trapped instead. The Dragon approaches them within the mirror world, berating Regina for allowing her inner war to become external, but soon makes nice and begins to show them a way out that was being worked on by Sidney back when he resided there. As Emma and Regina begin to piece together a mirror portal back home, the Dragon becomes overwhelmed suddenly by the Queen's control over him, thanks to her still possessing his heart. She uses this control to force him to take on his true dragon form, then ordering him to kill the two women he's trapped with. He indeed tries, but his magical fire is instead used to bust through the mirror after Henry damages it, meaning Emma and Regina are able to escape and Henry doesn't have to crush the Dragon's heart to save his mothers as the Queen had originally intended. ("I'll Be Your Mirror")

1 of 6
Add photo
Retrieved from "https://onceuponatimeabc.fandom.com/wiki/Dragon?oldid=113278"
Community content is available under CC-BY-SA unless otherwise noted.