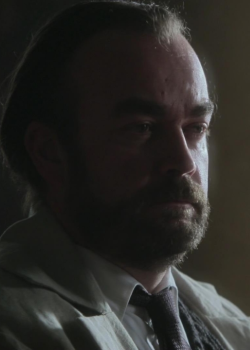 The Doctor is an unnamed man working at the asylum Alice resided at in "Down the Rabbit Hole".

After Alice's supposed second trip to Wonderland, she is committed to a mental asylum. Dr. Lydgate and two other professionals decide to give Alice a final examination, stating that she may be released if all goes well. At first, during the interview session, Alice seems vacant and gives very vague answers to the questions she is given. However, as the interview session proceeds, she begins to open up more and she claims that everything she said was false, however, Lydgate refuses to believe this, stating that she made it up as an adult and points out that isn't normal. She insists that she doesn't believe any of the Wonderland tales any more, but Lydgate points out that he knows she's lying because she still calls out for Cyrus in her sleep, a genie she claimed to fall in love with. At the mention of her lost loves name, Alice begins to cry, so Lydgate offers her a procedure that will help her forget. The two other professionals give glances knowing of the pain that will be involved. Wanting to forget, Alice signs the contract she is given and readies herself for the lobotomy. ("Down the Rabbit Hole")

1 of 2
Add photo
Retrieved from "https://onceuponatimeabc.fandom.com/wiki/Doctor_1_(W.01)?oldid=84840"
Community content is available under CC-BY-SA unless otherwise noted.