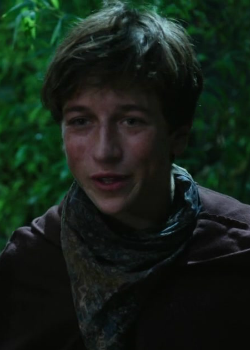 Devin is a Lost Boy that took an immediate disliking to Henry, the supposed savior of magic. He later got his heart ripped out by Regina so that she could communicate with her son, along with Emma and Mary Margaret.

Devin approaches Henry, the boy Pan has been looking for for a long time, and picks a fight with him. However, since Henry is able to use his belief to turn a stick into a sword, he easily defeats Devin in battle, and cuts his cheek. Devin is later hunting a pig when he's trapped by a net set up by Mary Margaret, Emma and Regina, all of which are looking for Henry. Regina attempts to bribe him with candy to win him over, but the kid doesn't bite, telling the three women that the boy they love is the most vicious Lost Boy he's met in ages. In order to get a message to Henry, Regina ends up ripping the boys heart out, much to Mary Margaret's displeasure, and uses this to force him to go into Pan's camp and give Henry one half of an enchanted mirror. Through this mirror, the three women are able to see Henry again, reassuring him that they love him and are coming for him. ("Good Form")

Retrieved from "https://onceuponatimeabc.fandom.com/wiki/Devin?oldid=107922"
Community content is available under CC-BY-SA unless otherwise noted.