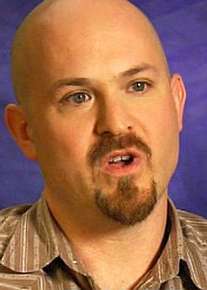 David H. Goodman is a television writer and producer.

Goodman is a 1995 graduate of Wesleyan University.

In 1997, Goodman became a script coordinator for the sci-fi television series The Visitor. The series was cancelled after its first season and Goodman became script coordinator for the supernatural drama series Buffy the Vampire Slayer. He joined the crew of this show mid-way through the second season in 1998. The series was created by Joss Whedon. Goodman left the show with the close of the sixth season in 2002.

In Fall 2002, he became a story editor and writer for action series Fastlane, scripting the first season episode "Dosed". He also wrote for the series Birds of Prey and contributed two episodes, "Three Birds and a Baby" in 2002 and "Gladiatrix" in 2003.

He moved on to working as a co-executive producer for the first season of new science fiction procedural Fringe, joining the show for the second episode "The Same Old Story" in Fall 2008. He wrote the episodes "The Ghost Network", "The Equation", "Safe", "The No-Brainer", and "Ability" for the first season. He left his staff position at the close of the first season. He was credited as a co-executive producer and writer for a single second season episode, "Unearthed". He contributed to six episodes in total for the series.

He became a co-executive producer and writer for new science fiction drama The Event in Fall 2010. He wrote the episodes "Protect Them from the Truth", "For the Good of Our Country", "And Then There Were More", "A Message Back", and "Us or Them". The show was canceled after completing its first season.

He joined the crew of the American Broadcasting Company (ABC) fantasy drama Once Upon a Time as a writer and co-executive producer for the first season after the series was picked up.

The following is a list of episodes of Once Upon a Time that credit Goodman as their writer.

Retrieved from "https://onceuponatimeabc.fandom.com/wiki/David_H._Goodman?oldid=113612"
Community content is available under CC-BY-SA unless otherwise noted.