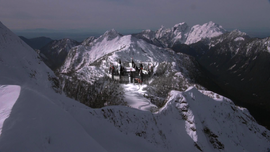 The Dark Castle is a large castle located in snowy mountainous area of the Enchanted Forest and is the residence of Rumplestiltskin.

Jiminy visits Rumplestiltskin at the Dark Castle to deliver the stolen goods that were ordered, and is also given a potion by the Dark One that will help take care of the problem he is currently having with his parents. ("That Still Small Voice") Three Arendelle princesses - Ingrid, Helga, and Gerda - travel to the Enchanted Forest to enlist Rumple's help at the Dark Castle. Ingrid is in search of a way to control her ice powers, and so Rumple provides her a set up gloves and a magic urn, all in exchange for the sisters' yellow ribbons. ("The Snow Queen") Upon discovering Cora's first born daughter, Zelena, Rumple begins training her in the arts of magic, allowing her to learn from the Dark Castle. However, their lessons are forced to end when Zelena can't get over her growing jealousy for Regina. ("It's Not Easy Being Green") Regina, meanwhile, continues her magic lessons with Rumple, who begins doubting her commitment. He also meets with Jefferson and Dr. Frankenstein, conspiring to help break Regina, and make her move on from wanting to resurrect her former love, Daniel. ("The Doctor")

Anna of Arendelle pays Rumple a visit to the Dark Castle, wanting to know the truth behind her parents reasoning for visiting him. He agrees to help, but not without her doing something for him in return... ("The Apprentice") Rumple acquires a new maid, Belle, when agreeing to help her father, who is currently in the middle of the Ogre Wars. Arriving at his castle, she is shown what to do, and when preparing his tea, she accidentally chips one of his cups. ("Skin Deep") Wanting to kill Snow White, Regina has Rumple perform a shapeshifting spell on her, turning her into a peasant as disguise. However, when Rumple doesn't take the cloak off her when she's done, she confronts him at his castle, which leads her to choose to embrace her evil side, accepting the nickname, the "Evil Queen" ("The Evil Queen") While Belle works as a maid in Rumple's castle, an intruder, Robin Hood, breaks in one night, attempting to steal a powerful wand. Rumple catches and tortures the thief, however, but Belle eventually frees him out of pity. ("Lacey") Not too long after returning home from his trip to Camelot, Rumple is forced to deal with the infamous Queens of Darkness as they kidnap Belle from the Dark Castle, ransoming her for a magic gauntlet. ("Heroes and Villains")

When going into town for supplies, Belle returns home with an injured Samuel, her childhood friend. Rumple agrees to let the maid tend to him until he is better, but once it's learned that Samuel has been lying to Belle, and is only after Rumple's dagger, Belle gets the best of him, and the Dark One transports him to a swamp. ("Out of the Past") When spinning straw into gold one day, Rumple converse with Belle who is trying to open up the curtains, but when doing so, she accidentally falls off the ladder. Rumple catches her, and a moment is shared. ("Skin Deep") On Baelfire's birthday, Rumple mourns his loss, but Belle interrupts, and so he is forced to share his story. ("Going Home") Belle and Rumple begin to grow quite close, even possibly falling in love with one another, and Rumple agrees to tell Belle of his son if she goes into town and returns home with straw. She contemplates not going back, but after an encounter with Regina, the brunette decides to use true love's kiss to break Rumple's curse. This fails though, when he backs out, and the Dark One ends up kicking Belle out. Regina later lies to him that she committed suicide. ("Skin Deep") Both Snow and Charming visit Rumple at his castle, and during both their visits he is eventually able to bottle true love. ("Heart of Darkness") Charming visits Rumple in hopes of finding something to vanquish the Queen, but leaves disappointed, for there is nothing. ("Lost Girl")

Retrieved from "https://onceuponatimeabc.fandom.com/wiki/Dark_Castle?oldid=108143"
Community content is available under CC-BY-SA unless otherwise noted.