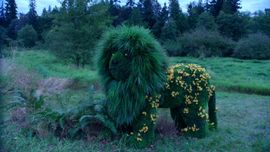 The Dandy Lion is a bush located in the Greener Pastures that is trimmed into the shape of a lion. Alice and Cyrus hide the latter's bottle near the Dandy Lion bush for safety.

After emerging from the bottle, Alice, the White Rabbit and Cyrus turn back to human size and then the genie tells Alice to open her hand after casting a small spell on it. Confused, she opens it to discover three ruby diamonds, which Cyrus explains are her wishes. Alice then releases the White Rabbit from the bag she had him kept in, asking if there’s any hard feelings. He assures her its fine, stating he shouldn’t have ever led her to Wonderland as it’s been nothing but trouble for her. However, she tells him that he didn’t lead her, as she followed. As he leaves, Alice asks Cyrus about wishes and he explains the rules of magic. Alice is unsure of what to wish for, so Cyrus offers to take her on a walk. They eventually find themselves at a small café, where Cyrus discusses his life, warning her of a man named Jafar. He continues talking about his adventures, prompting Alice to want to learn how to sword fight. He also shows her some of his magic but showing her magic paper, which can emit odors and change color. Cyrus later teaches Alice how to sword fight and she appears to be a natural at it. During the lesson, Alice kisses Cyrus, hoping that he likes her back, which he does. The next morning, Alice wakes up to a saddened Cyrus. He explains he’s falling in love with her, but can’t allow it as when she uses all her wishes, he’ll be gone. Alice then promises to never use her wishes and she and Cyrus then bury the bottle in a hole next to the Dandy Lion, unaware that the White Rabbit saw them. ("Trust Me")

Alice practices her sword fighting skills, waking Will up. She explains her plan on how they will get Cyrus back; involving his bottle, claiming it is hid in the Mimsy Meadows. Alice then decides to continue their quest without the White Rabbit as he’s been through enough. Alice and will make their way further to the Meadows, but the latter warns her about talking to loudly, as she never knows who is listening in Wonderland. Will puts the idea in Alice’s head that Cyrus has moved on from her, as he hasn’t contacted her, but she refuses to believe this. They soon come across a large lake in their way, so get help from a fairy named Silvermist, who apparently has a past with Will. As they fly across, Silvermist drops Will into the water, so Alice is forced to go in after him to rescue him. They find themselves stuck on a small island, where Alice talks about how her love life isn’t perfect, as Will claims. Frustrated about being stranded, Alice stomps her foot, causing the island to shake and they fall into the water. They climb back on and discover they’re on top of a large turtle, so Alice decides to ride it to the shore. When they arrive on the shore, they meet Silvermist again and Alice watches as he apologizes to the fairy. She also asks him about Anastasia, a girl the fairy mentioned, but he refuses to talk about her. When they arrive at the Meadows, Alice and Will watch as Jafar searches the Tum-Tum tree for the bottle. She then reveals that she lied about the location of the bottle to find out who she can trust. They go to the real location, but are shocked to see that the bottle is missing. With all hope of rescuing Cyrus seeming gone, and as Alice suspects him of abandoning her, she receives a message from Cyrus on magic paper, confirming he’s alive. She sends him back a note, assuring him that she’s coming. ("Trust Me") After retrieving the Forget-Me-Knot, Alice and Will return to the Dandy Lion and are shocked to discover the White Rabbit stole the bottle. ("Forget Me Not")

Retrieved from "https://onceuponatimeabc.fandom.com/wiki/Dandy_Lion?oldid=87674"
Community content is available under CC-BY-SA unless otherwise noted.