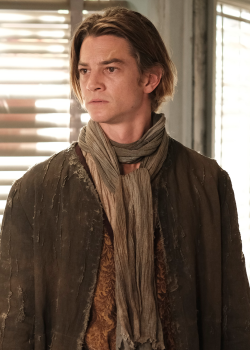 Edmond Dantès, also known as the Count of Monte Cristo, and with an alias of Lord Wilmore, is an episodic character on Once Upon a Time. Once a rich man with a loving fiancée, all was taken away from him by a group of people whom he spent the rest of his life trying to get revenge on. He was offered some help by the Evil Queen, in exchange for helping her get some revenge of her own, but things ended up poorly for him yet again, and he ended up dead when another facet of this Evil Queen used him as a pawn to manipulate her "better half".

Edmond Dantès was born to a rich family in Monte Cristo, where he was the count, and had a fiancée whom he loved more than anything. However, he was imprisoned by a man named Baron Danglars who also had his home burned to the ground and his true love killed. Edmond was able to escape the prison though, amassing a new fortune piece by piece and adopting the alias of Lord Wilmore, all to lure the Baron to a party held at his new home so that he could skewer him with a sword in front of the entire array of guests. The Evil Queen, Regina, witnesses this, and appreciates the decade of work that has gone into the Count getting his revenge. He makes clear that he will work for the rest of his life to gain his revenge on all the people who helped the Baron, but Regina says that he might not have to, offering to give him a list she has of said people in exchange for him helping her get some revenge of her own. She has him pose as a refugee in one of the villages she razes so that he may be found by her worst enemies, Snow White and Prince Charming. Because they are so insufferably kind, they offer him a job as their new wine steward, though Edmond finds himself taken aback when he meets Snow's handmaiden Charlotte, who reminds him of his dead fiancée. He later goes to the Queen to tell her of his successful infiltration, but questions if the Charmings really deserve to die. She assures that if he wants his revenge then he will do as she asks, and so he takes the venom of the Agrabahn vipers that she provides and he pours it into the royal couple's wine... only to learn that Charlotte is to be dining with them that night, and so he quickly confiscates the wine and doesn't go through with the job. Rumplestiltskin is happy about this, for he needs the Charmings alive, but can't have the Count tempted to kill them ever again. As such, he doses Charlotte with the poison and tells the Count that the only way he can halt her story is by going to the Land of Untold Stories and remaining there forever, lest he wants her to die. The Count is distraught, but goes to this new land as instructed, thereby wrecking Regina's plans. ("A Bitter Draught")

The Count, along with Charlotte, is among the people whom Mr. Hyde plucks from the Land of Untold Stories, forcing them to come with him on a dirigible to the town of Storybrooke where all their stories can play out. The Count's heart is soon stolen by the Evil Queen, who is now separate from Regina, and she orders him to continue in his mission to murder Snow and Charming. As such, he leaves a summons asking that they meet him at the dirigible, only to instead be met by Regina who attempts to call this whole thing off. This fails, for the Count is no longer in control of his own actions, and later Regina discovers the dead body of Charlotte as the poison has finally taken her. The Queen laces her cloak with a magic-dampening spell, meaning Regina, upon touching it, can't use her powers to defend herself, while the Count heads to the docks and, unable to fight the Queen's control, tries to kill the Charmings. Without her magic, Regina has to fend him off with a sword and, when he comes close to actually murdering her friends, she is forced to throw her sword into his back, killing him. She sees this as the only way she could have saved Snow and Charming, only for the Evil Queen to appear and reveal that this was her plan all along, for she wanted to reawaken a tiny piece of darkness within Regina. ("A Bitter Draught")

1 of 4
Add photo
Retrieved from "https://onceuponatimeabc.fandom.com/wiki/Count_of_Monte_Cristo?oldid=108630"
Community content is available under CC-BY-SA unless otherwise noted.