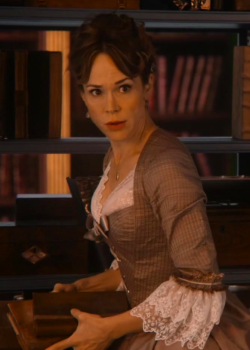 Colette is the mother of Belle, who defended her daughter during an ogre attack by sacrificing her life. This act of heroism was unknown to Belle and it sent her on a journey to Arendelle to discover the truth.

As her kingdom is at war with ogres, Colette packs up as many things as she can in her castle to evacuate before the ogres attack. As she has men carry trunks of books to her carriage, she searches for her daughter, Belle, who she quickly finds; the girl reveals she went back to get a book - the first one her mother ever read to her. Colette is touched by this, but now in a hurry as the ogres are nearing. As the two women prepare the leave, they hear the ogres have already stormed the castle, so they decide to take cover and hide in the library. They keep quiet as an ogre storms through, but are not quiet enough as the creature soon discovers them, throwing the table and screaming at their presence. Belle then wakes up the following day, having no recollection of the events that happened after the ogres attacked. She makes her way through the castle where she discovers her mother's funeral is being held. Wanting to learn what happened to Colette, Belle travels to Arendelle where she receives her memories in the form of a rock from Grand Pabbie. However, after a run in with the Snow Queen, she loses the memory rock and returns home right back where she started. Her father, Maurice, finally reveals that truth, however, that Colette risked her life so guards could help Belle escape to safety, but when they returned to rescue her, she was already dead. Having learned of this, Belle vows to be a hero just like her mother. ("Family Business")

Retrieved from "https://onceuponatimeabc.fandom.com/wiki/Colette?oldid=101645"
Community content is available under CC-BY-SA unless otherwise noted.