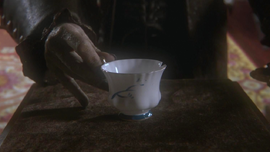 The chipped cup was a part of Rumplestiltskin's tea set that, when she was cleaning, Belle dropped and chipped. After he lost Belle, the cup became more and more treasured to Rumple and he rendered it his most cherished keepsake.

When Rumplestiltskin acquires Belle as a maid, he brings her back to the Dark Castle where he begins running down a list of chores she will tend to during her stay. As he does this, the beauty pours him a cup of tea, but she is startled by the Dark One when he jokingly tells that she will skin the children he hunts. Because of this, she drops the cup, chipping it, and though Belle is initially afraid of how Rumple will react, the Dark One brushes it off as it's "just a cup". Rumple starts to fall in love with Belle over time, but is unable to believe she'd feel the same way. He pushes her away, locking her in the castle dungeons, and in a fit of rage, he smashes his tea set against the wall... all but the cup Belle chipped. He eventually kicks the maid out, but some time later he is visited by the Evil Queen, who lies that Belle was shunned by her father for her association with the Dark One, and eventually committed suicide. This crushes Rumple, and so he later removes a chalice from a podium and places the chipped cup there instead, it now meaning more to him than any other object. ("Skin Deep")

When the Evil Queen's curse is cast, the chipped cup ends up in the town of Storybrooke, still under the possession of Rumplestiltskin, who has gone on to be known as Mr. Gold. Around Valentine's Day, when Gold repossesses Moe French's truck, Moe retaliates by robbing Gold. Sheriff Emma Swan is alerted to the situation and manages to retrieve all of the items in less than a day; however, one particular item is missing, and until it is retrieved, Gold tells her that she might as well have recovered nothing. Hell-bent on getting his item back, he ties up and gags Moe and throws him into the back of his van, taking him to a cabin in the woods and begins to beat the poor man until he tells him where the item is and who told him to take it. Gold is caught by Emma and arrested, and, in his cell, he is visited by Regina. When Regina says that she has his item and will give it to him in exchange for his name, Gold admits that his name is Rumplestiltskin, meaning he has regained his old memories, and so Regina gives his precious item back: his chipped cup. As Regina leaves, Gold stares at his cup in his cell, relieved to have it back. ("Skin Deep")

With the Dark Curse broken, Belle and Rumple have reunited, but when the latter is unable to refrain from his dark ways, it causes tension for the couple. Things lighten up though when Belle is able to have time away, and she is later touched to see that Rumple has kept the chipped cup after the many years that have passed. ("Broken") Belle ends up losing her memories when falling over the town line after being shot, so Rumple attempts to use the chipped cup to help her remember their past together. She starts to grow frustrated though, not knowing what all is going on around her, and Rumple's talk of magic only makes things worse. When her former lover refuses to give up, in tears, Belle throws the cup across the room, smashing it, and she begs for him to leave her alone. Rumple does so, heartbroken. ("In the Name of the Brother") Time passes, and Rumple does end up being able to form a relationship with Belle again, but she now has false memories, and goes by the name of "Lacey". As the residents of Storybrooke await their impending doom as the town begins to revert into the forest it was before the curse, Rumple restores the chipped cup and pours a memory potion made by Blue into it. He gives it to Lacey, successfully jogging her memories, and the two are able to embrace in a reunion. ("And Straight On 'Til Morning")

The town is saved by Emma and Regina, but now Henry has been kidnapped and taken to Neverland by Greg and Tamara, leading Rumple to join the journey to rescue the boy. Rumple believes that the only way to save Henry from Peter Pan is to sacrifice his own life, but Regina suggests that there must be a way to contain their enemy. Rumple gets an idea, however the item he needs is in Storybrooke. They get help from a mermaid, Ariel, who travels to Storybrooke with a magic sand dollar she must give to Belle. Once Belle receives the item, she activates the message within the sand dollar, which is Rumple asking her to find the item he desires, which she can find with "the strength of their love". Belle is puzzled until she thinks of the item that is most symbolic of her love with Rumple: the chipped cup. She finds and places the cup in a cupboard on a saucer, triggering a spell that opens a hidden compartment in the floor. Inside, Belle finds Pandora's Box. ("Dark Hollow")

Thanks to the storybook author, Isaac Heller, all those of Storybrooke are written into a new story, Heroes and Villains, which takes place in an alternate reality where the villains win and the heroes lose. Rumplestiltskin, who has reverted to his evil ways, lives out his happy ending with Belle and their newborn son. In this new reality he is known as a famed hero, the Light One; however, this is all threatened when Henry Mills finds his way into the book and sets out to set things right. Isaac, wishing to stop him, finds Rumple and alerts him that if he doesn't kill the boy then all his happiness will be undone. This leaves Rumple conflicted, and so he goes to Belle for advice, during which he is given a cup of tea. He drops the cup, however, chipping it, similar to what Belle did in the real reality; though apologetic, Belle assures that the cup is fixable. Rumple states he doesn't believe it'll be that easy, but he is referring to the more pressing matter. ("Operation Mongoose, Part 2")

With the Author's work undone and Rumple's power being take away, Emma Swan becomes the Dark One, and so she plots to use the all-mighty Excalibur to snuff out the light. Only a hero can pull it from the stone though, and so she tasks an enslaved Merida with training Rumple, whose heart has been wiped clean of light and darkness, into being just that. Needing something to give Rumple motivation, Merida steals the chipped cup from the pawn shop and has the former Dark One fight her, threatening to break it if he refuses to do so. Rumple manages to work up the courage needed to save his most precious possession, and so he gets through one day of practicing with Merida. ("Dreamcatcher") Still camped out in the woods, Rumple, tied up, is left alone while Merida goes to fetch Emma. Instead of remaining prisoner, he uses this alone time to his advantage to break free; however, by doing this, it involves smashing the chipped cup and using a shard of it to cut himself free of the ropes that bind him. From there, he sets out to reunite with Belle. ("The Bear and the Bow") During his trip to the Underworld, Rumple comes across that realm's version of the chipped cup, which sparks a memory of him wishing Belle farewell before leaving for the quest to save Hook. ("Souls of the Departed")

Retrieved from "https://onceuponatimeabc.fandom.com/wiki/Chipped_cup?oldid=97457"
Community content is available under CC-BY-SA unless otherwise noted.