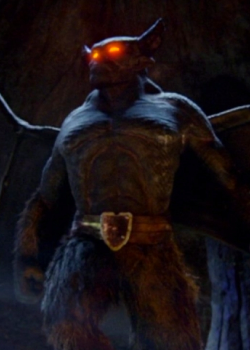 The Chernabog is an ancient demon that guards the Dark Curse, seeking the person whose heart has the darkest potential, wishing to devour it.

After receiving anonymous instruction to come to the Forbidden Fortress, Ursula and Cruella have a stand off with Maleficent, who insists that she did not invite them and warns them to leave. But before things get too heated, Rumplestiltskin reveals himself to be the one who gathered the girls in promise of a happy ending. He tells them of a plan to retrieve the Dark Curse, which requires the three witches' special skills. Maleficent and the other two agree, so they head to the location where the curse is kept. After Cruella successfully gets them past the first obstacle, Maleficent takes her turn and absorbs dragon fire that's guarding the curse with her staff. After Ursula grabs the curse, Rumple takes it and leaves the three women to die at the hands of the Chernabog, an ancient demon that guards the curse. Trapped in the room with the demon that seeks the heart with the darkest potential, Maleficent comes up with a plan for the three of them to escape. After realizing she's the one with the darkest potential, Maleficent distracts the Chernabog while Cruella and Ursula escape. She fights off the beast as long as she can, but when she thinks she's been abandoned she gives up. However, Ursula grabs her with her tentacles just in time and takes her to safety. The demon roars with anger as it cannot claim its prey. ("Darkness on the Edge of Town")

Hook and Belle arrive at the town hall and explain to Emma and Regina that they found an Oxford professor of linguistics online who could translate an ancient incantation for them. This spell is supposed to free the fairies from the Sorcerer's hat. The group go into the woods to have Regina perform the spell over the Sorcerer's Hat using the Dark One's dagger. Regina performs the ritual and a burst of energy shoots forth from the Hat. The fairies emerge and everyone welcomes them back. As they hug, they're unaware of a creature made of black essence floating out of the Hat and drifting off into the sky. During the celebration, the diner suddenly shakes and a wave of darkness sweeps across the room. The group goes outside and finds the Chernabog perched atop the clock tower. The beast flies down at Emma and the others and then comes back for another pass. They take cover in an alley and figure that it was released from the Hat, Belle warns that once something is released, it can never be retrapped. Emma and Regina step out and blast it, forcing the demon to retreat. Regina warns that a blast like what they did should have destroyed it, and the others go off to find a solution. The Chernabog flies over the town. After Ursula's call and her explanations about the flying creature, Emma and Regina watch it from the mayor's office. Regina figures that it's after her, but Emma refuses to sacrifice her. She wonders what will happen to the Chernabog if they lead it over the town line into a world without magic. Regina warns that the demon will crush her if it catches her, but Emma says that she'll help. They drive for the town line in Emma's yellow bug. The Chernabog lands on the roof and tries to rip through, smashing through the windshield. Regina refuses to let them both die, and thanks Emma for trying. She then teleports out onto the road ahead and waves to the demon. Emma speeds up and then hits the brakes, and Regina leaps out of the way. The Chernabog hits the barrier and dissolves when its magic dissipates. ("Darkness on the Edge of Town")

Retrieved from "https://onceuponatimeabc.fandom.com/wiki/Chernabog?oldid=72929"
Community content is available under CC-BY-SA unless otherwise noted.