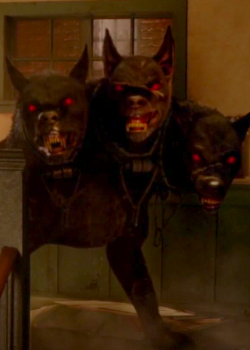 Cerberus is an episodic character on Once Upon a Time, appearing in "Labor of Love". A three-headed Doberman Pinscher hellhound demon dog who works for his master Hades, he guarded the prisons of the Underworld before finally being defeated by the very person he killed.

Hercules, a demigod is unable to enter Mount Olympus until he completes the twelve labors, and so he spends his time in the Enchanted Forest doing so. Following an encounter with Snow White, and helping her be able to lead her people, he winds up battling Cerberus the three-headed hell hound, and when on the quest to doing so, he runs into Megara. Because of unknown circumstances, Megara had been on the run from the beast, and when running into Hercules the two briefly argue over what to do, but Hercules pleads for Megara to go on her way and allow him to take down the beast after the two of them. This results in Hercules life being taken, however, and soon after it kills Megara as well. The two both end up in the Underworld for years to come, but Megara remains the prisoner of the Underworld's ruler, Hades. ("Labor of Love")

Megara manages to escape Hades' prison with the help of Captain Hook, but the latter stays behind to face Cerberus. The three-headed beast later chases Meg through the woods but Emma teleports her away in time. Mary Margaret thinks she knows how to defeat the beast, getting Hercules to help, but upon seeing Cerberus again the demigod simply runs away. Cerberus has the chance to kill Emma and her comrades by Hades calls him off, although Cerberus later attacks the apartment where the heroes are hiding out. Eventually, Mary Margaret realizes that the way to defeat the beast is by attacking all three heads at once. While she gets the middle head with an arrow, Herc gets the left with his sword and Meg gets the right with a dagger. Finally, the hell hound dies in a puff of black smoke and is gone forever. ("Labor of Love")

Retrieved from "https://onceuponatimeabc.fandom.com/wiki/Cerberus?oldid=113492"
Community content is available under CC-BY-SA unless otherwise noted.