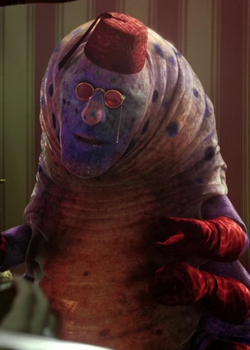 When first arriving in Wonderland, Jefferson is first met by the Caterpillar who simply asks who he is. ("Out of the Past") The hookah smoking Caterpillar is sat in Wonderland, on top of his large mushroom, minding his own business smoking from his bong when he finds out that his day will soon be disturbed. Alice, who has returned to Wonderland in order to gain proof that the place is real, emerges from the tall grass surrounding the Caterpillar and she hides underneath the mushroom, carrying a bag on her back containing the White Rabbit. She reaches forward and takes a piece of the mushroom before running down a golden road, deeper into Wonderland. The Caterpillar, annoyed that she has stolen from him, tells her that the mushroom belongs to him and he demands she give it back. However, she ignores his pleas and she continues to run into Wonderland. She eventually comes across the Queen of Hearts' maze whilst on the run from the royal guards. She and the rabbit then eat the Caterpillars mushroom in order to shrink and hide in the bushes. ("Down the Rabbit Hole")

Jefferson and Regina walk out of the mirror door at the other side of the looking glass, they are surrounded by large, bright green grass and big, colorful mushrooms. We are shown the crisp blue sky and a large caterpillar sitting on a near-by mushroom. Jefferson and Regina stand there, taking it in. They begin to walk down the pathway with walls of grass. The giant caterpillar suddenly turns to them, with his many gloves, monocle, fez, and the bong he's smoking. "Who are you?" he asks in a deep voice, blowing puffs of circular smoke with every other syllable. "Who... who?" he asks, Regina comes face to face with a ring of smoke which dissipates in front of her. "I hate Wonderland." Jefferson says as he and Regina move further into Wonderland. ("Hat Trick")

Cyrus makes his way down some steps and into the Underland of Wonderland, in flashback. As he does so, he walks past the bodies of many unconscious people, eventually approaching the Caterpillar, who tells the genie, "We're closed. Party's over." Cyrus, stepping over a woman, assures the large insect that he's not there for that, but for his help. The Caterpillar states that he's been called many things, but helpful isn't one of them, and two armed guards emerge from the bushes behind the insect's platform. Cyrus, ignoring the guards, says he's heard the Caterpillar can make people disappear, people who never want to be found again, and the insect says that he can - but the cost for such a thing is highly significant. The genie says that he has only one thing of any value, and if the Caterpillar helps him, then it shall be his. He presents the insect with the compass given to him by his mother, explaining that it's called a Lost and Found; it will point you to anything you've lost in your life that you wish to find again. Cyrus steps forward and finds two swords aimed at his throat by the guards, stopping him from getting any closer to their boss, and the Caterpillar comments that Cyrus must really want to disappear to give up something so valuable. "It's the only way to keep someone safe," he explains, "Someone I care about very much." The Caterpillar accepts the payment and gives an invisible hideout in the Outlands for Cyrus and Alice. ("Home")

Alice finds herself wanting to know who stole the bottle from the hole, so Will suggests using a Forget-Me-Knot to view who stole it. However, there's a catch, as the Forget-Me-Knot lies with the Caterpillar. Alice is wary of going with Will, because of his debt, but they go nevertheless. Once they arrive in the Underland, Will offers double of what he owes for the Forget-Me-Knot, but the Caterpillar declines. Alice realizes that the Caterpillar doesn't have the Knot, stating that he's greedy and would have taken the offer of double. The Caterpillar reveals that the Grendel has the Knot, so Will offers a new deal; he retrieve the Knot for the Caterpillar and his debts are forgotten about. The Caterpillar agrees to this, stating either way whatever Will does is in his favor; if he succeeds and brings back the Knot, then he's in possession of the powerful tool. If the Grendel kills Will, then he also gets what he wants. Will wonders how him taking the Knot for himself favors the Caterpillar, so the Caterpillar explains he'd be further in his debt and then threatens to turn him into a Screaming Head. Later on, Jafar visits the Caterpillar and overhears that he's waiting for the Knave to return, so he waits around, hoping to be able to capture him. ("Forget Me Not")

The Caterpillar walks into the throne room, greeting Jafar is his majesty. Jafar points out that the insect is back, stating he better have some good news. The Caterpillar explains that his men spent the whole night searching but they had no luck, so they'll head out again after they've had some rest. Jafar is furious at the mention of rest, reminding the caterpillar that the third wish has been made so the genie is back in its bottle. He demands that the insect get more men or raise an army if he needs to, stating he needs the bottle before someone else finds it. The caterpillar says he's tried to get men, but adds that word has gotten out that working for Jafar shortens one's life expectancy. Jafar adds that failing him does too, telling the caterpillar that he has failed him spectacularly. He grabs his serpent staff and its eyes begin to glow red. He raises his arm, about to cast something on the caterpillar, but the insect stops him desperately, explaining that there may be another way to get what he wants. Jafar asks what it is, so the Caterpillar explains that there's an ancient creature that has been imprisoned for one hundred years and most people are afraid to even speak its name for fear that it might return. A curious Jafar asks him to go on, so the insect explains that it is more powerful than any army and once you tell it what you want, nothing can stop it. Jafar leans close to the caterpillar and asks for a name, so the insect complies and tells him that it's called the Jabberwocky. ("Nothing to Fear")

After the Fourth Curse

Retrieved from "https://onceuponatimeabc.fandom.com/wiki/Caterpillar?oldid=108866"
Community content is available under CC-BY-SA unless otherwise noted.