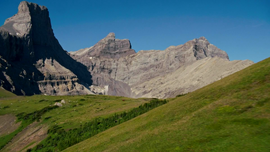 Camelot is a realm ruled by King Arthur, known for its Knights of the Round Table, and being home to numerous magical items, including that of Excalibur and a very special gauntlet.

Camelot is created from desert lands after Merlin receives magic. He becomes a well-known healer and falls in love with a woman called Nimue, who ends up becoming the first Dark One. ("Nimue") Nimue uses Merlin's tear to turn him into a tree. ("Dreamcatchers") Jefferson travels to Camelot in order to rob the castle's treasury. There, he meets fellow thief Priscilla, and upon escaping together, the two run off, in love. ("Out of the Past") Merlin, still a tree, gives prophecies to the young orphan Arthur, who's told that he's going to pull a sword named Excalibur from its stone one day and become king. ("The Broken Kingdom") This comes to pass, but Arthur and his friends Lancelot and Percival are shocked to see that the sword has a broken-off tip. ("The Dark Swan") Arthur hides this from his people, and his wife Guinevere grows sad when he obsesses over finding the sword's other half - the Dark One's dagger. This leads to her and Lancelot setting off on a quest to find it, using Merlin's gauntlet to track it down. They find it, after falling in love on the way, and are instead handed the Sands of Avalon by Rumplestiltskin in exchange for the gauntlet; they can make broken things appear fixed again. Disgraced for having kissed the Queen, Lancelot leaves Camelot while Guinevere refuses to use the sand on the sword, wanting to leave her husband instead. However, he uses the sand on their marriage, making her the perfect supporting wife, and then on Camelot itself, transforming Merlin's meek tower into a grand castle. ("The Broken Kingdom")

As the residents of Storybrooke stand beside Granny's Diner in the woods, which they used to travel to the Enchanted Forest, King Arthur and his knights, including Percival, arrive on their horses. Protecting her friends from potential danger, Emma asks who they are, so Arthur introduces himself and explains that they've come to find them. A confused Hook asks what he means, so Percival tells Arthur they think their arrival a surprise. Snow asks if he was expecting them, so Arthur explains that Merlin their arrival a long time ago. Emma questions where the wizard is for she was told that he's missing and Arthur confirms that he has been for years, but not for much longer, because according to the prophecy, they're destined to reunite them with Merlin. The king then escorts the group back to Camelot, taking them all inside the castle where they're welcomed by trumpets. ("The Dark Swan")

Arthur introduces the Storybrooke folk to Queen Guinevere before announcing that there is to be a ball thrown in their honor. They are taken to see Merlin, who they see is a tree, and Regina pretends to be the savior prophesied to save him. At the ball though, Percival attacks her, knowing her to be the former Evil Queen, and David kills him in self-defense. Robin is gravely injured and Emma uses her dark magic to save him, setting her on a dangerous path. ("The Price") To communicate with Merlin, the heroes need something called the Crimson Crown, which David quests with Arthur to retrieve. David risks his life to get it, but Arthur steals it, making it look like it got lost. David is knighted into the Round Table while Lancelot returns and warns Snow that Arthur is evil. ("Siege Perilous") Emma is hassled by the voice of Rumplestiltskin in her head but Hook manages to help her drive him out. Snow and Charming argue over who's the real liar, Arthur or Lancelot, and decide to pull off a ruse that exposes Arthur for who he really is. However, he uses the Sands of Avalon to control them. ("The Broken Kingdom")

Emma stops her spellbound parents when they grow aggressive towards Regina. She has been whittling dreamcatchers and used one to discover how Merlin became a tree - via a tear shed for a lost first love - and so replays the memory of Daniel dying to Regina to get a similar tear. It doesn't work, and we learn that Emma set things up so that Henry's crush, Violet, would reject him, but taking the girl's heart. Henry's tear is harvested instead and Merlin is freed. ("Dreamcatcher") Merlin frees all Arthur's prisoners and finds Merida, who kidnaps Belle in order to make her help save her brothers. ("The Bear and the Bow") The heroes need to steal Excalibur and use Zelena to infiltrate the castle. However, she betrays them all to Arthur, tethering Merlin to the sword and putting him under the King's control. ("Nimue")

Emma's loved ones are teleported to a forest clearing in Camelot, each one of them tied for trees and held for ransom, with Arthur using Merlin as a threat. Emma shows up with the payment - the dagger and the Promethean spark - but ends up tricking Arthur and Zelena and defeating them, freeing her friends and family. Hook sustains a cut from Excalibur though. ("Birth") With Arthur and Zelena having failed at their little hostage situation, they return to Camelot without Excalibur, and the King wants to find an enchanted helm that will force his men to do battle against the Sorcerer and the Dark One. He fails at retrieving it. ("The Bear King") Due to the cut in his neck, Emma turns Hook into a Dark One within a field of middlemist flowers to save him. ("Birth") When Hook enacts a Dark Curse after a series of fights and make ups with Emma, she adds a memory-wipe feature that means the last six weeks will go forgotten. The curse consumes Camelot just as Merida arrives to claim her revenge on Arthur, who at the same time is marveling Excalibur's return to its stone along with Guinevere. ("Broken Heart")

Retrieved from "https://onceuponatimeabc.fandom.com/wiki/Camelot?oldid=108759"
Community content is available under CC-BY-SA unless otherwise noted.