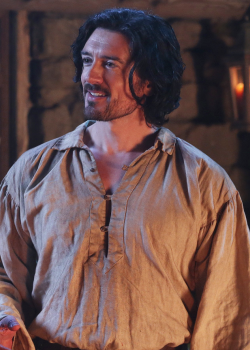 Brennan Jones is the father of Liam and Killian Jones. Raising his sons out on the seas, he eventually sells them both into slavery so he can escape arrest, for he's been a longtime fugitive. He manages to cheat death though, falling under a sleeping curse, only to be awoken by his true love about a century later. They get married and have another child, but Brennan's wife soon dies, as does he when he comes across Killian.

Brennan takes his sons aboard a ship, but eventually abandons them both during the night when learning there are officers waiting at the next port. He cheats his way around death, falling under a sleeping curse, and spends the next century under it until he is awoken by his true love: the nurse who tends to him. They get married and have a child, but she soon falls ill and dies. Killian Jones, meanwhile, has found his own way to cheat death, and has been requested by the Evil Queen to kill her mother. Before that can be done though, Regina must test Hook to make sure he is fearless, and so she takes him to a tavern where she reveals his alive and well father. She wants Hook to kill him. With Regina leaving Hook to do just that, the Pirate reunites with his father, who shares his tale of how he cheated death. Brennan reveals that he was put under a sleeping curse, but was awoken by the nurse who tended to him. They began a life together until she died of an illness several years prior. Instead of killing Brennan like he was ordered to, Hook agrees to let him live if he flees the kingdom, which the Pirate can make preparations for. Hook soon learns that Brennan had another son with his new wife, which was named after his deceased brother. Hook is outraged that his father could just replace Liam the way he did, and realizing that Brennan has not changed, Hook kills him, deeming his desire for revenge to be too important to cop out on the Queen's test. ("Swan Song")

Gallery of photographic stills released to promote the episode.

1 of 9
Add photo
Retrieved from "https://onceuponatimeabc.fandom.com/wiki/Brennan_Jones?oldid=107148"
Community content is available under CC-BY-SA unless otherwise noted.