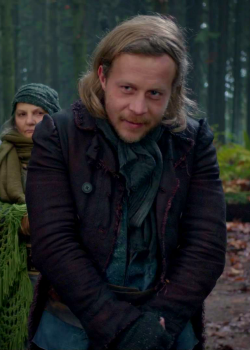 Blacktooth was a villager in the Enchanted Forest who tried to extort a reward from the Evil Queen and ended up dying for it; when his soul was transported to the Underworld, he became Cora's lackey and was tossed into a pit of hellfire. He appeared in "Souls of the Departed".

A platoon of Black Knights march forward in the Enchanted Forest, then parting down the middle to reveal the Evil Queen in all her tyrannical glory. She extends her greetings to her subjects as she approaches the multitude of villagers who have been lined up outside their homes, and one of them responds to her good faith by stepping out and presenting her majesty with a pie, for apparently it is Regina's birthday. The peasant girl bows and Regina approaches impressed, proceeding to dip her finger into the pie and try some of the filling. She deduces that it's blueberry, which isn't bad, but she of course prefers apple. Luckily for them, she announces as she pushes the girl out of the way, she's not there for the pie - the present she wants, none of them have. But they will get it for her, the present being Snow White's heart on a plate. She walks intimidatingly up and down the line as she states that she knows the bandit's been there, and if someone doesn't start talking... She goes to rip out the blueberry pie gal's heart, but another villager soon tells her to stop as he too steps out of line. It is Blacktooth, named for his one black tooth. He claims that he can help her, and she approaches him with interest as he further states that he can tell her where Snow White is. "Then tell me," she insists, but the black-toothed villager informs the Queen that he wants something in return first. She half-laughs at this, proposing a deal: he tells her what she wants to know, and she'll kill him quickly instead of slowly. With that, she outstretches her arm and begins to choke him with her magic, demanding that he reveal the information. "Tell me where Snow White is," is the last thing he hears before Snow herself announces, "Behind you," and Blacktooth's neck is snapped. He drops to the floor, dead. ("Souls of the Departed")

After Blacktooth died, his soul was transported to the Underworld where he ended up at the helm of Cora, the Evil Queen's mother. When the Evil Queen herself arrives, having journeyed there along with her friends to find Captain Hook, Blacktooth is one of the first people she sees, spray painting a store window. He reports back to Cora in the Underworld's mayoral office, later finding Regina again and getting caught out for stalking her. When she asks why he's been following her, he reveals that someone is interested in meeting her, and he proceeds to reintroduce Regina to her mother. Cora tells her daughter to leave the Underworld, or else she'll be forced to do something drastic. She teleports herself, Regina and Blacktooth to a flaming cave where the latter is put on an outstretching ledge. Cora then uses her magic to make the fire from the pit below rise up and consume him, meaning he's been taken to a "worse place". She threatens to do the same to Prince Henry if Regina doesn't leave, although this plan eventually fails. ("Souls of the Departed")

1 of 6
Add photo
Retrieved from "https://onceuponatimeabc.fandom.com/wiki/Blacktooth?oldid=94992"
Community content is available under CC-BY-SA unless otherwise noted.