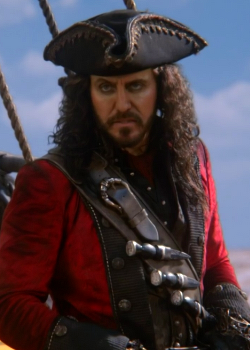 Black Beard is a supporting character on Once Upon a Time. He is a notorious pirate, and an enemy of Captain Hook.

Black Beard and his pirate crew find and steal the Jolly Roger, a ship that belongs to Captain Hook, and he goes on to kidnap Prince Eric, who he stores on Hangman's Island until such time that he can be used for ransom. Ariel, Eric's true love, teams up with Hook to find the ship, and it's not long before they discover it. Hook walks aboard and demands that Black Beard show his face, and he does so, proceeding to engage the hook-handed pirate in a sword fight. Ultimately, Hook wins due to his great knowledge of the ship, and Black Beard ends up with a sword aimed at his throat. Just as Hook is about to kill his adversary, Ariel interrupts, begging Hook not to do it because Eric isn't on board and she needs Black Beard alive because he's the only one who knows the true location of her prince. Black Beard laughs, realizing this entire occurrence was a rescue mission for "some wench", and he mocks Hook for having gone soft. He goes on to offer Hook a choice, saying that he'll give them the location of the island Eric's stranded on if he can keep the Jolly Roger, but if the ship is reclaimed, then Eric will be left to die. Ariel demands that Hook agree to Black Beard's terms, but he is unable to part with his ship, forcing Black Beard to walk the plank. He cuts his arm as he does so, saying that it's incentive for their razor-tooth friends below, and Black Beard is quickly pushed into the water, where he's seemingly killed by sharks. Ariel jumps into the water and swims away to find Eric and ultimately discovers Hangman's Island, going on to live with him happily ever after, whereas Hook claims Black Beard's crew under the threat that they may live out the same fate as their former captain. ("The Jolly Roger") However, Black Beard is actually saved by Ariel and, later, when the Dark Curse is re-enacted, he trades a magic bean to Captain Hook in exchange for the Jolly Roger. ("There's No Place Like Home"/"Fall")

Captain Hook returns to the Enchanted Forest of the past along with Emma Swan, having fallen through a time portal created by the Wicked Witch of the West. When they accidentally make it so Snow White and Prince Charming don't meet when they're supposed to, Snow heads to a tavern to discretely meet with Black Beard, hoping that he will be able to provide her safe passage on his ship to a different land so that she will no longer be a wanted woman. She presents him with a bagful of gold, which he says should be enough for a trip on his ship, however, he adds that a "blind eye" will cost double, which Snow would have had she robbed the prince's carriage as she did originally. Emma and Hook use Rumplestiltskin's crystal ball to witness this and quickly orchestrate events to get time back on track. ("Snow Drifts")

Thirty years after it's cast, the Snow Queen's freezing spell on Arendelle is undone, thus freeing those in the kingdom. Hans and his brothers soon make their way through the castle, finding Anna and Kristoff, where the youngest prince of the Southern Isles declares himself the new king. Hans and his brothers try to arrest Anna and Kristoff, but the pair fight their way out of the castle. The duo then search for the pirate, Black Beard, information Hans picks up from an informant at the docks. The pirate, enticed by Hans' promise of gold, agrees to comply in tricking Anna and Kristoff. The couple arrive in search of a wishing star, which can grant a wish if the user is pure-hearted. After the transaction is sealed, Hans and his brothers corner them. Sentenced to death, Anna and Kristoff are bound up and placed in a trunk. Stubbornly, Anna insists Elsa will escape from the urn and take back the kingdom, but Hans informs her that thirty years have already passed. When she, in shock at this news, babbles on in hysterics, an annoyed Hans shuts the trunk. Lastly, Black Beard orders his crew to toss the luggage into the sea, which they promptly do. ("Fall") As punishment for his crimes against Anna and Kristoff, Elsa shrinks the Jolly Roger down and traps it in a bottle. While doing so, however, a mermaid by the name of Ariel gets trapped as well, that is until Hook sends Ursula to the Enchanted Forest to retrieve the vessel, and he is able to resize it with the help of Will Scarlet. ("Poor Unfortunate Soul")

When the Author rewrites the fate of everyone in the book, they all get transported to a new story wherein the tables are turned on heroes and villains alike. In this reality, Captain Hook is no longer a captain - he is a scrawny and cowardly deckhand who works for the real captain of the Jolly Roger, the fearsome captain Black Beard. As such, when Henry comes to Hook for help, Hook is useless to the young man's cause. Black Beard overhears some of their conversation and believes his deckhand to be masquerading as a captain, then telling him that if he beats him in a sword fight he can be captain for real. Hook just returns to scrubbing, to Black Beard's amusement, and Henry wonders why he doesn't stand up to him. Th kid then proceeds to grab a sword himself and use it to slice through a rope, making it so that another rope with a metal attachment goes flying into Black Beard's face, knocking him out cold. Hook and Henry then steal the ship and, later, when Henry becomes the new Author, he is able to set everything back the way it was. ("Operation Mongoose, Part 2")

Taking with him some of the finest jewels Agrabah has to offer, Hook finds Black Beard gambling in an Enchanted Forest tavern and bribes him with payment in exchange for a magic bean so that he can get home to Emma. Unimpressed with the jewels, Black Beard forces his old adversary to raise the stakes, and so Hook, knowing that Black Beard has been without a vessel for a while now, gambles his ownership of the Jolly Roger in a game of cards. If he wins, he gets the bean and gets to keep the Roger; if Black Beard wins, then he gets the ship and Hook remains stranded. During the game, Black Beard taunts Hook for once again betting his ship to get to a woman, suggesting that perhaps the woman is the thing he should have given up. Hook grows aggravated and, thanks to his opponent having six aces in his deck, ends up losing the game... but Black Beard soon learns that the Jolly Roger isn't in this realm, it's in Storybrooke, and so if he wants to claim his winnings then he's going to have to use the bean anyway - plus he needs Hook to guide him to the right place. And so Black Beard reluctantly throws the bean into the ocean and jumps down the resultant portal with Hook. However, the two of them don't end up in Storybrooke. Instead, they end up in Neverland, thanks to the protection spell placed on Hook by Gideon, and then they're chased by the worst of the worst Lost Boys who stayed behind after Pan's defeat. They make it to the beach where Black Beard knocks Hook out and commandeers the only rowboat available. He makes clear that, should Hook live, he still owes him a ship, while Hook is forced to continue running for his life. ("Mother's Little Helper")