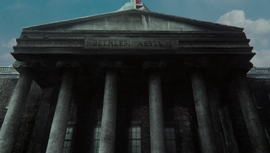 Bethlem Asylum, also known as Bethlem Royal Hospital is where Alice was admitted to for being insane, following her return home from Wonderland.

After the Red Queen supposedly murder her true love Cyrus, Alice returns home from Wonderland, and is subsequently admitted to a mental asylum in Bethlem Royal Hospital. When first arriving, she is interviewed by Dr. Arthur Lydgate, who suggests a procedure that can make her forget what he thinks are "fantasies" about being in Wonderland. Alice agrees to go through it, but not too long later she is broken out by Will Scarlet and the White Rabbit, two friends she made in Wonderland. After a brief confrontation with Dr. Lydgate, the three leave through a portal. ("Down the Rabbit Hole") Time passes, and Alice's new nemesis, Jafar, travels to Victorian England where he finds Dr. Lydgate at the asylum. After terrifying him with the memories of the White Rabbit, and even showing him said rabbit, he learns everything Dr. Lydgate knows about Alice, including the location of her father. ("Who's Alice?")

Retrieved from "https://onceuponatimeabc.fandom.com/wiki/Bethlem_Asylum?oldid=84873"
Community content is available under CC-BY-SA unless otherwise noted.