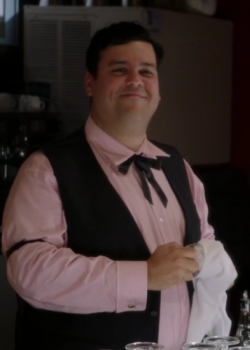 The bartender is an unnamed man who works at the restaurant as Emma and Captain Hook went on a date to.

Back in Storybrooke, in a restaurant, a happy couple are eating spaghetti together. They pick up the same strand and suck on each end until they both reach in for a kiss. Emma and Hook then enter the restaurant, the latter asking what she thinks. Emma says she's glad that it's not Granny's and then they sit down, Hook charmingly pulling out her chair. He goes on to say that he's only seen her on one date and it was with a flying monkey, so asks if he needs to top it. Emma jokingly comments that the bar was set high as he proposed, but Hook reminds her that he tried to kill her too. Once they're settled, Hook asks if he should order some drinks, but Emma seems hesitant. Hook wonders if this is because he might become even more irresistible, but Emma explains that she wants to stay sober in case the Snow Queen crashes their date. "You still think her being here has something to do with you" Hook points out, but Emma tells him she knows it because there was a puddle next to her car. Hook chuckles at this and tells her that she's come to have a good time and not worry. A smiling Hook then signals over to the bartender, who nods in return.

Meanwhile, Will Scarlet is sat at the bar. He notices the direction the bartender is looking and is worried to see Emma in the restaurant with him. He downs his drink and walks alongside a waiter, who is headed past Emma and Hook's table. He sneaks past the waiter, but bumps into an oncoming woman, knocking the waiter into Emma's table and spilling a drink down her dress. Will stops to help the fallen waiter as a frustrated Emma attempts to dry up her dress. A suddenly enraged Hook grabs Will by his shirt and demands he apologize to the lady. Emma looks at her date with shock and tells him it's okay. Hook releases his grip and looks with horror at what he just did with his new hand. Emma then notices Will and recognizes him as the thief who took off in the ice cream shop. Before anyone replies, he charges out the door. Emma stands up instinctively to chase him, but stops, reminding herself she's on a date and she won't let someone ruin it. All the while she's talking, Hook is just looking at his new hand with fear. Emma, continuing to talk, points out that he won't escape as there's an ice wall around the town. She soon notices Hook's uneasiness and holds his hand, assuring him it was just a glass of wine. "Sorry love, I don't know what got into me" he says, not removing eye contact from his hand. He begins to fear that Rumple's warning was right. ("The Apprentice")

Retrieved from "https://onceuponatimeabc.fandom.com/wiki/Bartender_(4.04)?oldid=73132"
Community content is available under CC-BY-SA unless otherwise noted.